A few weeks back on a cold Thursday evening we paid a visit to The Riparian Rooms to sample what was on offer from their new menu. The restaurant has a great spot in town right on the corner of the popular Broughton Street and East London Street.

When we arrived we were warmly greeted and shown to our table right by the large window, perfect for watching the night go by outside. Inside the surroundings are equally nice, it’s well laid out with a good amount of space between tables of various sizes catering for two to much larger parties. There’s also a downstairs area which has more of a bar vibe but equally nice interior.

There’s a great wine list on offer with lots to choose from however with an evening off from driver duties I decided to indulge in a Tanqueray ten and tonic and Miss Edinburger went for one of the Mocktails on offer. Which Mocktail I honestly cant remember but it was very tasty and refreshing. I got stuck in to my G&T as we set about deciding on our food.

I was impressed to see a couple of my favourites on the starter menu, scallops and pigeon breast. Aside from these there is a good selection of meat, cheese, veggie and seafood starters on offer. After much deliberation I opted for the seared pigeon breast, cubed Stornoway black pudding, Jersey Royal potatoes with smoked pancetta and sweet onion purée. Miss Edinburger went for the Haggis in breadcrumbs with mustard celeriac and whisky sauce. 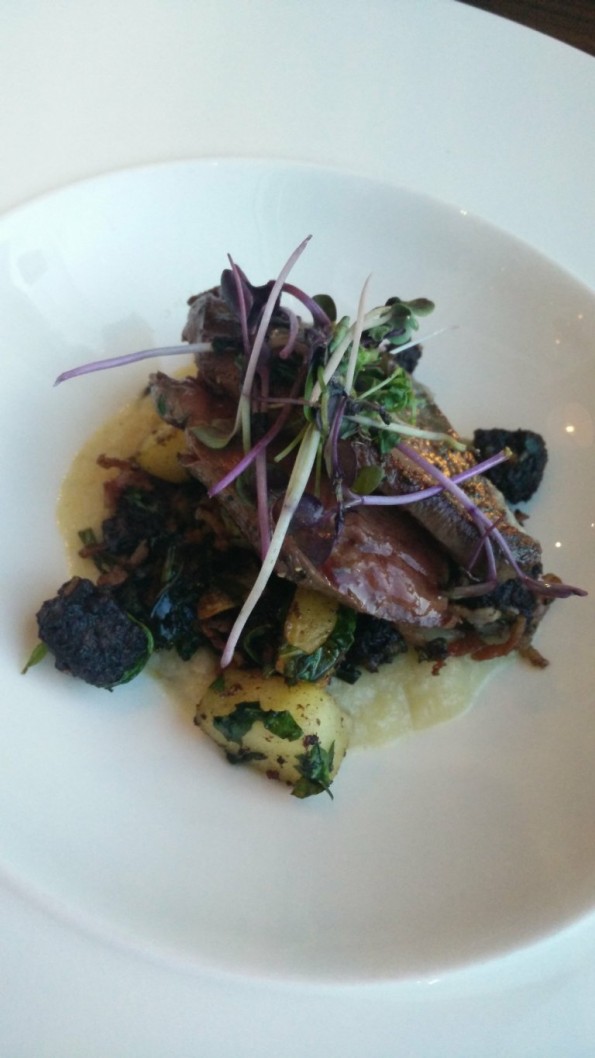 The pigeon breast was delicious, cooked very well, tasty without being overpowering and was well complemented with the Stornoway black pudding, smoked pancetta and sweet onion purée.  Miss Edinburgers haggis was also tasty and the mustard celeriac worked well however the whisky sauce could have had a bit more of a kick to it. Although that’s probably a matter of personal taste.

Again there was plenty of options on offer from the menu for main courses, with something sure to suit all tastes. (Bad pun alert) After opting against the seafood option for starter I couldn’t sea past (sorry about that) the monkfish, served with candied baby fennel, rosemary garlic cream sauce and Israeli couscous while Miss E went for chargrilled Toulouse sausage, crispy shallots, creamed mash buttered green beans and spinach.

The pan roasted monkfish again was very impressive, the substantial portion of fish was well cooked and really tasty. The fennel with the rosemary garlic cream sauce meant there was lots of flavours going on in the dish, all of which were good. The couscous was also tasty although when it comes to couscous I could take it or leave it to be honest and it didn’t change my opinion on that.

The chargrilled Toulouse sausage and mash was also very well received by Miss Edinburger. A sausage of epic proportions it was well cooked and had a lovely smokey taste to it. So good infact that despite my delicious monkfish I was a bit jealous I hadn’t ordered it. The creamy mash was also really tasty and nice and hot (nothing worse than luke warm mash) as were the shallots. The green beans.. well I’m not a fan of green beans but Miss E had eaten them all so I assume they were as good as green beans get. We also shared a portion of chips which in hindsight wasn’t needed although again the chips were very good.

Two very successful courses down and it was onto the dessert menu. I went for one of my favourites, rich sticky toffee pudding coated in a dark caramel sauce and vanilla ice cream. Miss Edinburger went for the apple, gin and blackberry crumble with homemade vanilla ice cream & custard (minus the custard).

My rich sticky toffee pudding was indeed rich, very rich actually and very very good. The portion was substantial, lovely and moist and was swimming (in a good way) in an amazing caramel sauce. I was immediately proclaiming it to be the best sticky toffee I’ve had, and I’ve had a few. Half way through I was totally stuffed but being the professional that I am I powered on through until the plate was clean.

The apple, gin and blackberry crumble was also very nice although by the time I got to try it I was on a sticky toffee pudding high so don’t remember it all that well. Miss E has however confirmed it was also very good.

We finished off a lovely evening with some tea and coffee and then it was time to roll down the road to the car. We thoroughly enjoyed our evening and the food was first class. A shout out also goes to our waitress for the evening who was very friendly and helpful, checking all was well with the food and topping up drinks without being intrusive.

We enjoyed our evening so much that we decided to head back for my 30th birthday meal a week later. I hate to have to say this after such a positive review but in the interest of honesty I feel the need to. Our experience on return was not of the same standard. Whist on the whole the food was good (I had mussels to start and steak for main which was very good) the service was not up to the same level, something which can be excused to an extent with a large table and a busy saturday evening. The sticky toffee pudding however, which I was raving about to my fellow diners was really disappointing. The rich toffee sauce had evaporated to a dribble, and the pudding itself was dry, almost cold and really tough and we had to send it back. To be fair our waitress was quick to resolve the situation with a sincere apology removing the dessert from our bill.

Our first evening at The Riparian Rooms was so good that I’m hopeful the second time around was just a one off and we will definitely be back in the near future for round three so we will be sure to report back on our findings.