Did you know the 5th September is Freddie Mercury’s birthday??

Well Hard Rock Cafe Edinburgh, will be celebrating by being Freddie for the day. This includes a number of fun things such as the staff dusting down their catsuits and donning their fake moustaches to become Freddie For A Day, and raise funds and awareness for the Phoenix Mercury Trust and the fight against AIDS and HIV.

Take a look at last year’s carry on, recognise anyone? 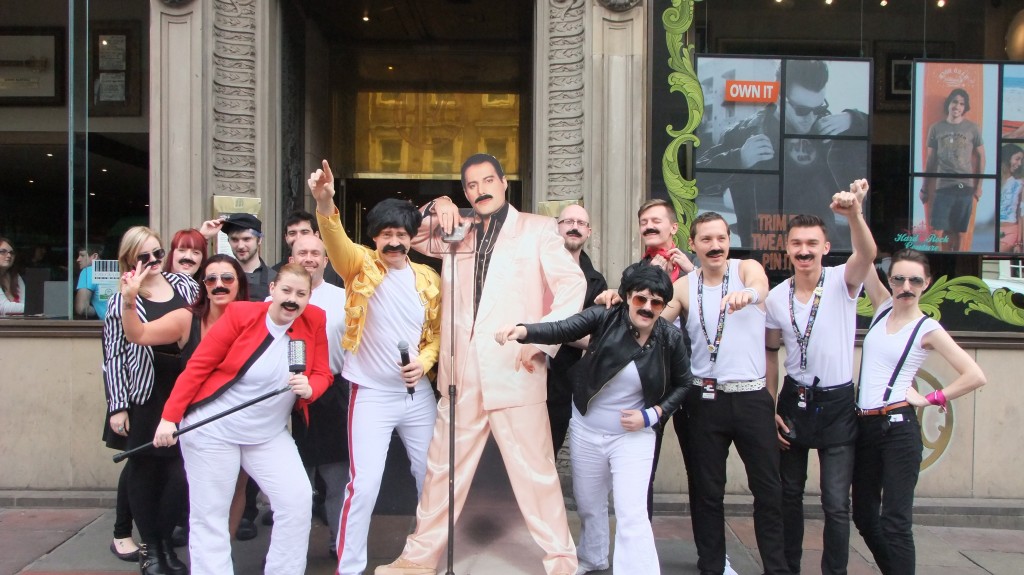 Freddie For A Day is a fundraising initiative of the Mercury Phoenix Trust which encourages friends and fans around the world to spend the day dressed as Freddie Mercury.

For one day only customers and staff at Hard Rock Cafe Edinburgh are invited to join in on a day full of Queen music, moustaches, Freddie costumes, and delicious Freddie cocktails.  Prizes will be awarded throughout the day for best Freddie Costumes, with the event ending at 11.30pm close.

“Hard Rock Cafe is delighted to be working alongside Queen and The Mercury Phoenix Trust on their annual ‘Freddie For A Day’ fund raising and awareness day on Friday September 5th. Each cafe throughout Europe will be encouraging local Freddie fans to come along dressed up as the icon and to raise funds for this great cause that funds HIV/AIDS awareness and education throughout the world”

Freddie for a day is held every 5th of September, marking Freddie’s birthday, whilst raising awareness and funding for the fight against AIDs and HIV through The Mercury Phoenix Trust. The Mercury Phoenix Trust was set up in 1992 in memory of Freddie Mercury and is responsible for raising awareness and funding charities globally in the worldwide fight against AIDS.

“The Mercury Phoenix Trust initiative Freddie For A Day is a global AIDS fundraising and awareness campaign, enabling fans around the world to help the Trust in its work and have fun whilst doing so. This continuing partnership with the Hard Rock Cafe will further raise the profile of Freddie For A Day as we join forces in many cities to celebrate Freddie’s life and help those less fortunate to fight this terrible disease which ended his life”

Hopefully this brief post has gotten you in the mood to get your Freddie on, remember if you do to include #AREYOUREADYTOFREDDIE on twitter and instagram.