Now we love a good bargain as much as the next person and when we discovered on Bookatable that Cafe St Honore had a lunchtime special 2 courses for £15.50 or 3 courses for £19.50 we knew we had to go along and try it out. They also offer a full lunchtime menu alongside the set menu. For those of you who don’t know the chef behind Cafe St Honore is Neil Forbes. Neil was crowned chef of the year 2014 and Scottish chef of the year in 2011. The main ethos of Cafe St Honore is making the most of local produce and showcasing it in a simple yet extremely tasty way. The use of local produce is evident in the ever changing menus with a new one each day for both lunchtime and dinner service offering slightly different choices.

The set menu on the day we dined was –

Even making a decision between just two dishes per course was a difficult task. Eventually after much deliberation and several slices of the sour dough bread we had made our choices. Having experienced set menus in other restaurant we ordered the 3 courses as we thought the portions would be slightly smaller but as you’ll see this theory was proven to be very, very wrong!

Choosing the starter was a simple task. With the sun shining outside we both knew it was too warm for soup. As lovely as the soup sounded we thought we’d opt for the colder dish. Grierson’s Organic Rare Breed Pork Rillette, Red Onion Jam, Our Lardy Cake was promptly brought out and we were very surprised at the size of the portion. The pork was delicious and well seasoned. The red onion jam was an excellent side to the pork, not too sweet or tart and the onion perfectly softened. When eaten with the lardy cake, all the flavours only made the pork taste even better. We could have easily eaten a pot of the onion jam and were planning what other dishes it could be eaten with at home. This was an excellent start to our meal! Our plates were cleared in a timely manner and there was a good break in between finishing our starters and the main course being brought out. Given the size of our starter we were very thankful for this. 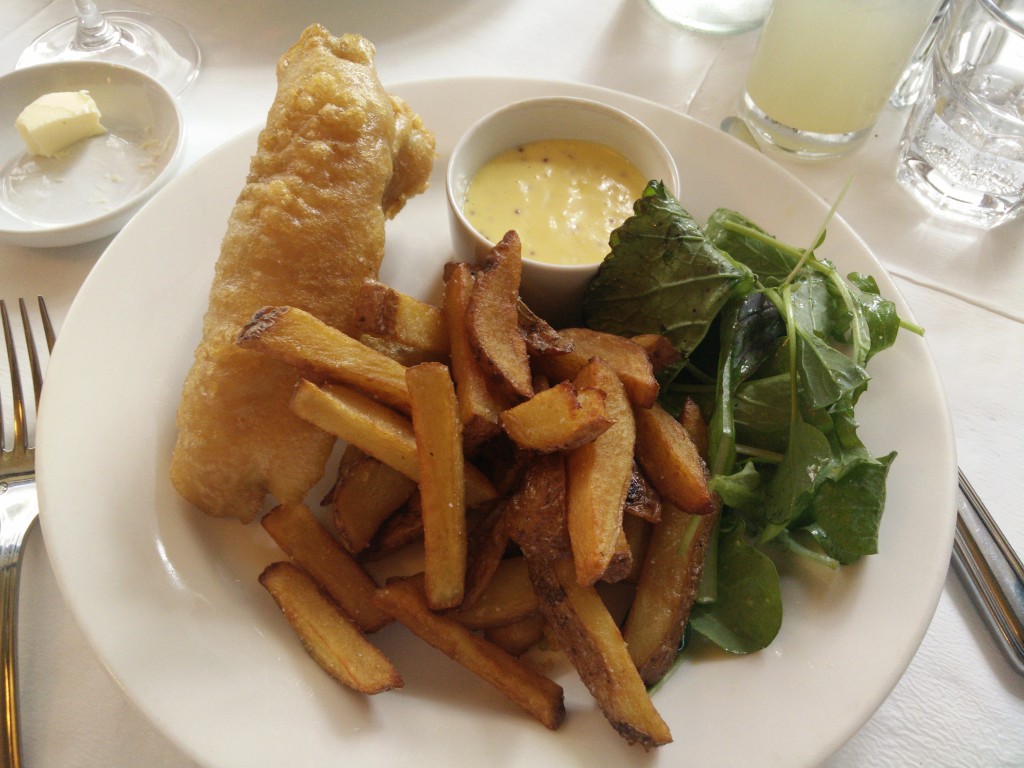 Both of the main courses dishes were very appealing and Mr E went for the Gartmorn Farm Free Range Confit Duck Leg, Lyonnaise Potatoes, Spinach whilst I opted for the Secret Herb Garden Beer Battered East Coast Coley Fish & Chips. Now if you thought the starters were a homely sized portion then we’ve no idea what you would call the main portions. Mr E commented that the duck leg was very big and that it must have come from a very large duck! It was certainly the biggest we’ve ever been served in a restaurant and more evidence that only the best ingredients are used. The duck was well cooked and easily pulled apart with the skin having a fantastic crisp flavour, that only experience from cooking duck many times can achieve. Mr E was very pleased with his choice.

The beer battered fish and chips was everything you want from good fish and chips. The fish was fresh, batter crisp and full of flavour. There was a small hint of the beer flavour but careful not to overpower the taste of the coley. You might not be able to see from the photo but there were two pieces of fish. The chips, oh my goodness. Well they were probably the best chips I’ve ever had. No extra seasoning was required and each one savoured. If you want to know how to make them follow Neil’s simple instructions – cut, fry at 150c for 10 mins then cool, then fry at 190c until crisp and golden, add salt, serve. We will be definitely trying these out at home.

After clearing both our plates, we were feeling pretty full and thankful again for the short break between mains and dessert. 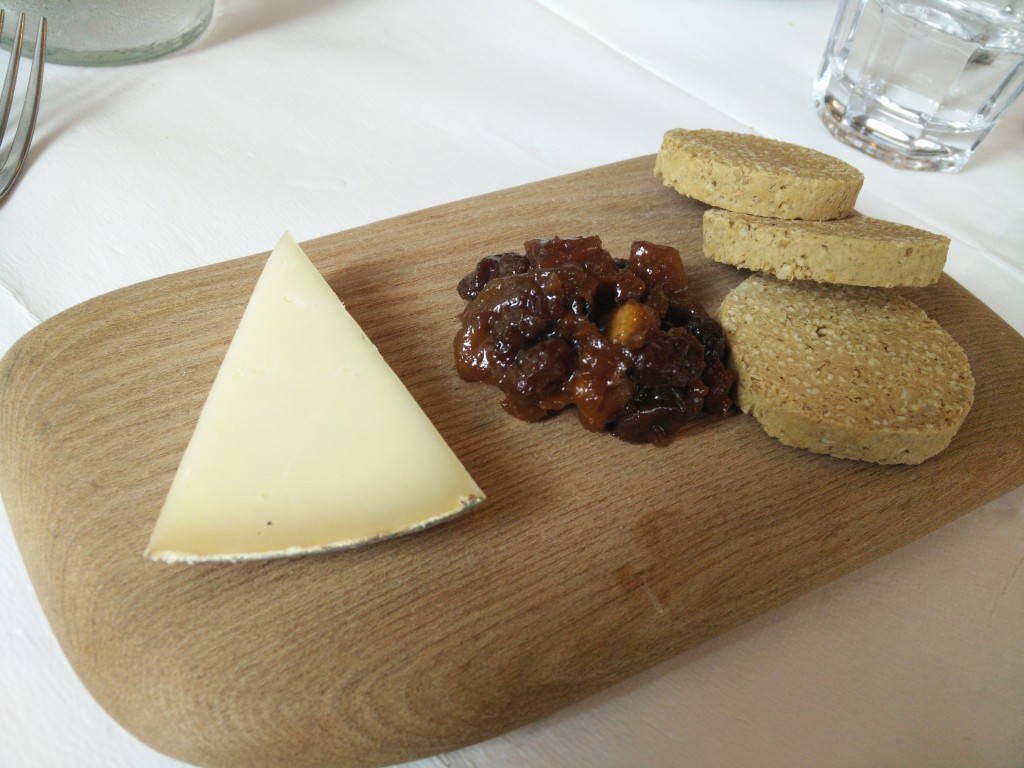 Thankfully the desserts were light and of course everyone has room for cheese and ice cream. My raspberry ripple ice cream was fresh and packed full of fresh raspberries. The brandysnap basket added a crunch to the ice cream. Mr E ordered the cheese dessert. He loved the homemade oatcakes and the raisin chutney. His only minor observation was he would have prefered a slice of softer cheese but the cheese served was still delicious.

So as you can see the lunchtime deal is fantastic value. Each dish is simply served but packed full of flavour and it’s definitely made us want to return. If you can’t make it for lunch they also offer a fantastic set menu at dinner which is slightly more expensive but given the quality of ingredients used and the level of service it’s worth every penny and more. We were very surprised to find it fully booked on a Saturday lunchtime. Although we think those dining are regulars from some overheard conversations, it’s very easy to see why they would return. The service was great and the breaks in between each course allowed us to fully appreciate each course and we never felt rushed! The team behind the scenes had done an excellent job with the local, seasonal ingredients and if someone had said we were going back for dinner the same we would have jumped at the chance!

If you’re planning on heading along after reading this then we’d highly recommend booking ahead, it really is the hidden gem of Thistle Street and we wouldn’t want you to be disappointed.