On Thursday night we were invited along to Chop Chop in Leith to review their offerings. Never one’s to turn down the chance of good food and especially free good food we jumped at the chance. Despite regularly eating out down the shore this was a first visit for us both. Upon entering we were greeted by the manager who was very friendly and swiftly showed us to our waiting table and informed us of the idea behind Chop Chop – Diners order collectively and share all dishes, which are brought to the table in a random order as soon as they are ready. In this way, mixing the textures and flavours of the dishes adds to the enjoyment of the meal. All of the dishes are handmade from fresh ingredients with no artificial colourings or preservatives. They are also famous for their dumplings. It was clear from listing to this how passionate they are about their food and the idea behind Chop Chop.

It was recommended we try the Unlimited Banquet for two and after a quick look at the menu we decided this would be the best option to try as many dishes as possible. I won’t lie, the unlimited part may also have been a deciding factor! The banquet for two includes: 8 pork and coriander dumplings, 4 prawn dumplings, Cucumber salad, Seasoned Chicken Wings, Crispy Northern Chicken (although we had the Crispy Northern Beef), Fried Egg Plant (aubergines), Boiled rice and Prawn crackers. We also had the Spicy squid with garlic. 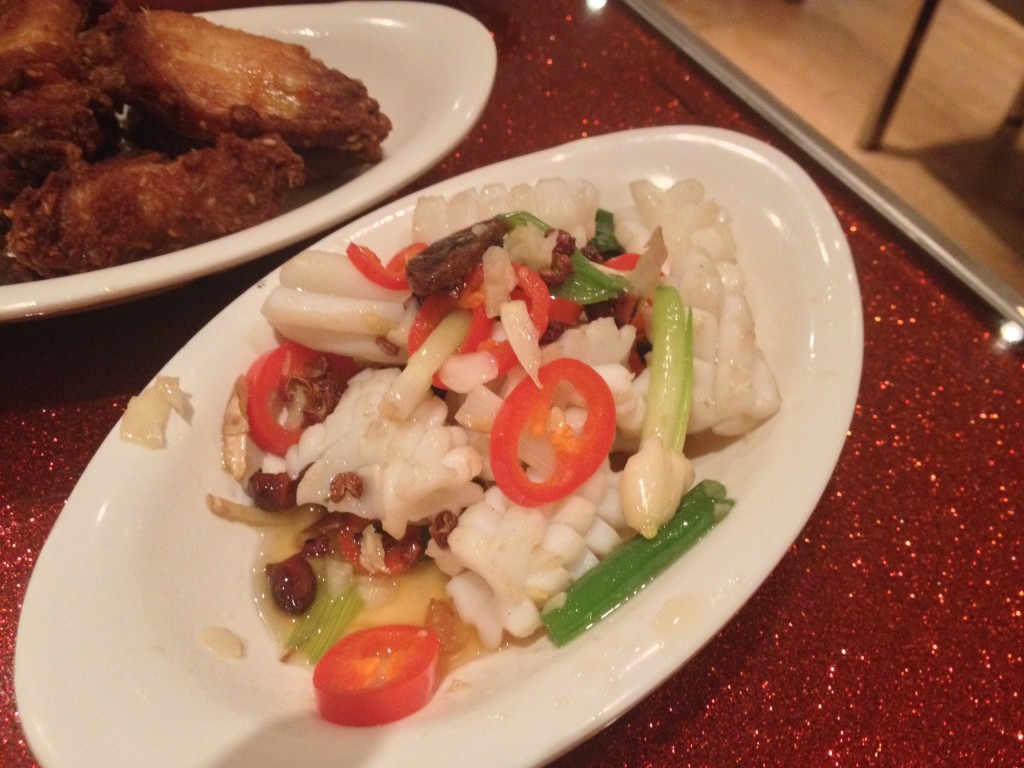 The first thing that struck me was just how different this was from the usual Chinese cuisine that we were used to. Dumplings are not something I have tried before and fried aubergines have certainly never been on my must try list. However I was pleasantly surprised by how much I enjoyed the fried aubergines as well as the rest of the dishes. The food in Chop Chop I would say is much healthier than what we would usually choose from the Chinese takeaway menu with sauces much simpler and lighter but certainly no less tasty! The crispy northern beef is the closest dish to the standard Chinese style that you find throughout Chinese restaurants in Edinburgh, with an almost sweet and sour taste. All the dishes were excellent, the prawn dumplings and chicken wings were my favourite dishes while the crispy northern beef and pork dumplings were hers. 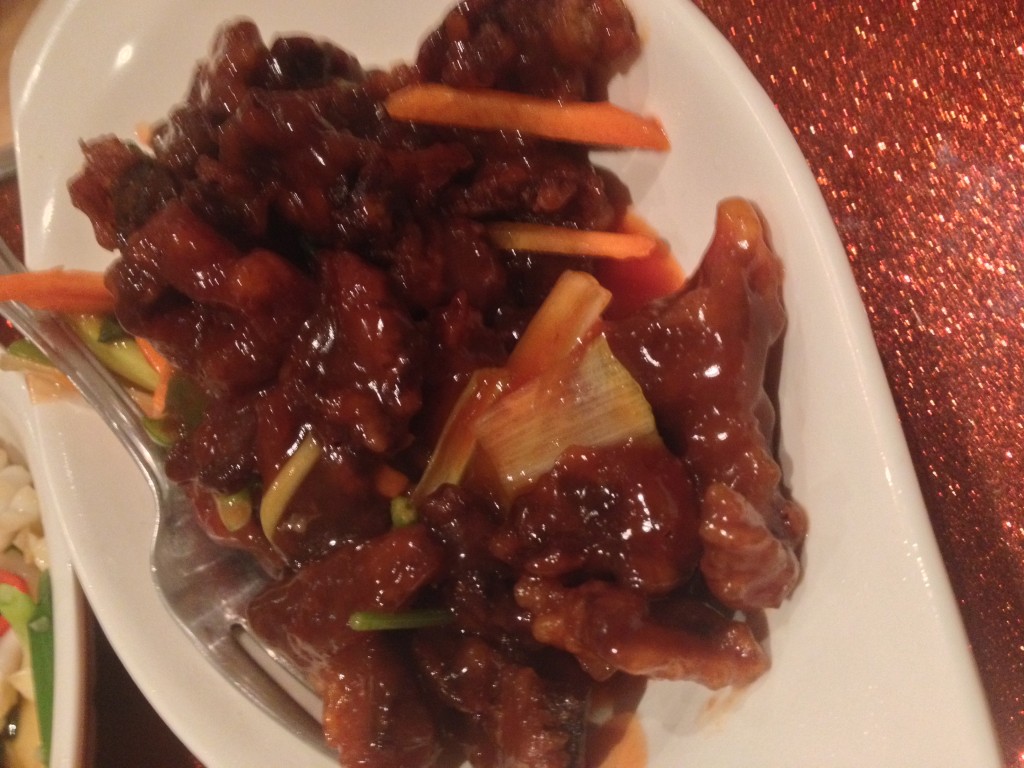 To create the sauce for dipping the dumplings in there is a small amount of ginger and chilli on the table, which you mix with the soy sauce and vinegar to create a simple but tasty sauce. Her decided to really go for it and added an insane amount of chilli to the sauce which was then too hot to eat, so over to me it went. The sauce complimented the dumplings very well and they were all swiftly polished off. 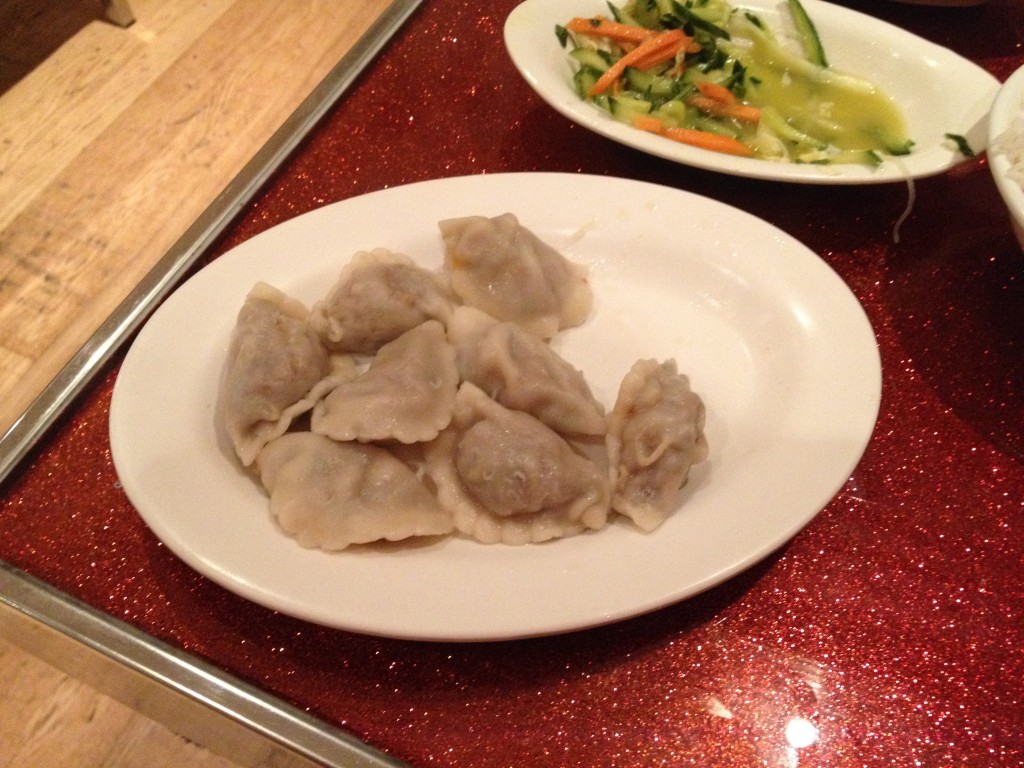 After initial excitement about the prospect of “unlimited” (the idea being you can re-order any of the dishes as many times as you want) we were at this stage rather full and with dessert still to go we put on the sensible hats and only ordered one more portion of the chicken wings. These arrived within minutes of ordering and again were swiftly dispatched into our grateful tummies. 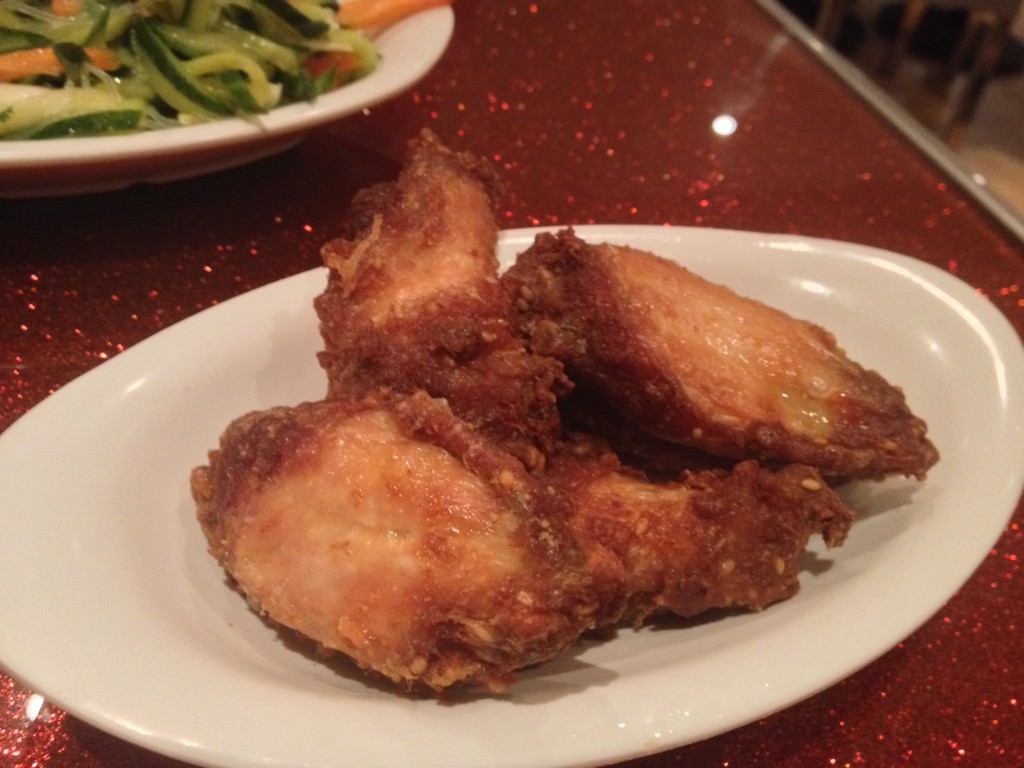 Onto dessert and again it was clear that things are different from the Chinese menus we have been used to usually consisting of banana or pineapple fritters for dessert. The Chop Chop dessert menu is quite substantial with the following on offer: Mixed fruit dumplings, Ice Cream, Peanut Dumplings, Sugar string apple, Sugar String Pancake and Fried Mongolia. We initially opted for one vanilla fried mongolia and one chocolate, however we were then (easily) persuaded to also try the sugar string apple.

The fried mongolia is a deep fried pastry filled with ice cream and coated with sugar. These were very tasty and a great way to finish off a meal. The sugar string apple is cooked apple pieces in a caramelised sugar coating. It comes with a bowl of iced water and the idea is you take a piece of the sugar coated apple and hold it in the water for a few seconds with turns the sugar coating crispy. We both really enjoyed the sugar string apple. It comes in quite a substantial portion so it’s perfect for sharing between two. 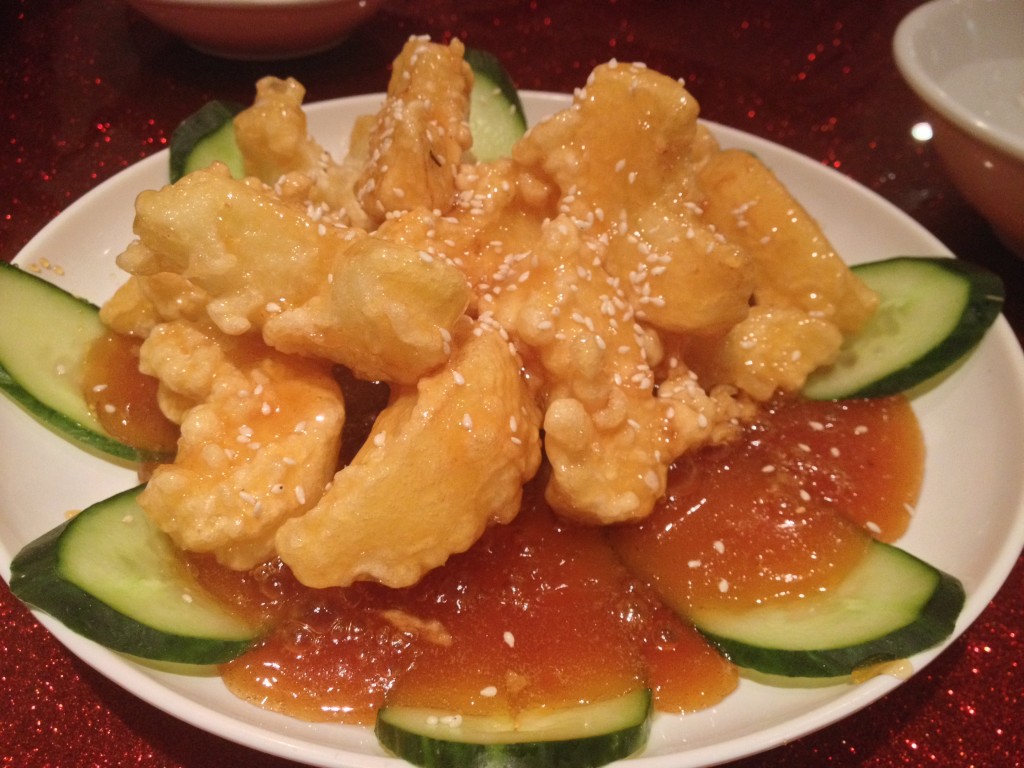 Chop Chop was a thoroughly enjoyable experience and we will definitely be back in the near future. They also offer takeaway for collection or delivery and the membership club gets you 10% off Sunday – Thursday and 5% Friday and Saturday. So if you are looking for great value, tasty Chinese food get yourself down to Chop Chop.