Now you may have seen on twitter that I’ve already been to Enzo before, a week ago to be exact. But the food was great and it was a lovely venue for a datenight, so Mr Edinburger and I headed up again on Wednesday to sample some more of the menu and to let him see what I had been raving about.

Enzo has been on our radar for a while. It launched end of July, start of August this year and the excitement leading up to the opening was well documented on twitter. Situated in The South Pavilion at Quartermile, Enzo is somewhat hidden but once found you’ll find it’s a very stylish building sitting in front of you. The folk behind Enzo made a conscious decision not to open on George Street as the clean cut lines and sharp edges they wanted, just wouldn’t fit in with the older buildings. So they found themselves in a glass box in Quartermile. What they have managed to achieve is elegant and sophisticated surroundings more on the understated side than in your face. 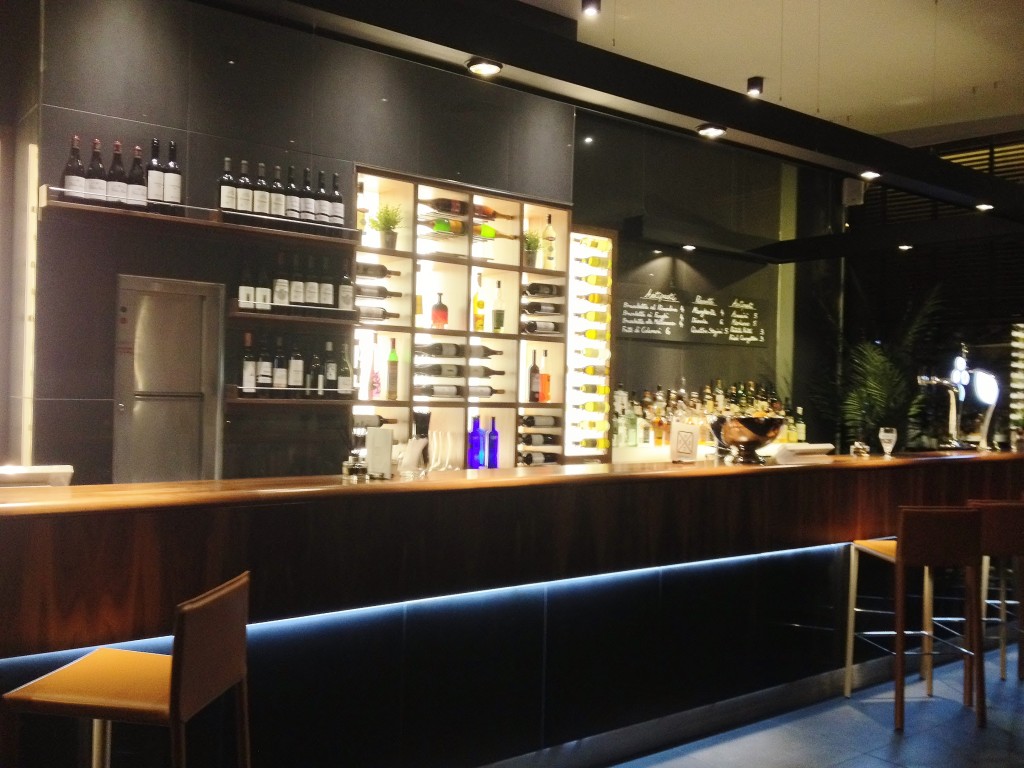 We arrived a little early, partly because we were becoming more and more hungry and the bus was a little quicker than expected. But not to worry we were shown to a seat in the bar and informed that as we had booked a table we would be treated to an Enzo G&T. This was an unexpected surprise but a lovely touch. The bar is downstairs with the restaurant situated upstairs. I do like this as sometimes bar areas can be somewhat noisy making it hard to hear your dining partner. Our cocktails arrived and what a treat they were. Mixed perfectly with the use of fresh ingredients, it made me feel like I was back on holiday.

The food served in Enzo is all Italian. The menu is not huge but there’s plenty of options for everyone and we had a tough time narrowing down what we wanted to have. Choices made we were seated upstairs and had a full view of the kitchen. This is something I like in a restaurant, nothing beats seeing your food being cooked. On my last visit the place was quite quiet but on this visit there was lots of groups booked in and families dining beside us. The restaurant had a real buzz and a very relaxed atmosphere.

To compliment our food we browsed their extensive wine list and eventually settled on a very tasty malbec. We opted for a 500mL carafe. We didn’t want a bottle so this was a good compromise.

The calamari was excellent. The portion was huge and would serve two if you wanted something to share. The batter was well seasoned and crisp and the squid was sliced and cooked very well and tasted very fresh. It was easy to eat and took minimal chewing. The courgette was very finely shredded and crisped up. I’m not normally a courgette fan but this was a great way to serve it. Mr’s mushrooms were a real treat too. His plate was cleaned before I could even get a taste which is always a good sign. They were well cooked and the bacon and shallot filling was delicious. Initially he thought it wasn’t that big a portion but with the crust topping they were very filling. All the flavours worked well together and definitely something you could try and make at home.

Mains was a little bit of a trickier choice. I had previously tried the ragu and the fresh pasta was excellent. This time I opted for Maiale a Cottura Lenta al Balsamico – Slow cooked pork belly with Balsamic onion, fine beans dressed with gremolata with a side of roasted potatoes with garlic and rosemary. My dining partner choose Tagliatelle alla Carbonara – Tagliatelle Carbonara style with smoked braised pig cheek. It was the braised pig cheek which got him.

Both mains were excellent. My pork belly was juicy and just falling apart and the crackling was amazing! It had a lovely sweet taste to it, thanks to the balsamic topping. The roast potatoes were proper roastie potatoes. You could definitely tell they’d been freshly made. Mr Edinburger’s carbonara was equally as great. The paste was al dente and very well cooked. The slices of pig cheek and mushrooms throughout added to the flavour. It doesn’t look like the biggest of pasta portions but with the carbonara sauce and the strong flavours it was more than filling.

We were offered the dessert menu but we both were a nice fullness and opted not to have anything. Instead I had a peppermint tea and Mr had an affogato. This finished off the evening perfectly. The whole dining experience was great. The staff are super attentive, we rarely had to fill our wine or water glass and when they could see we were in deep conversation, never once interrupted. Instead they waited until they caught our eye and checked everything was OK. Given how busy the restaurant was and the number of 6+ groups dining, we were served remarkably quick but with the right amount of time between courses to allow our food to settle.

Will we be back again, most definitely. Enzo do Italian dining very well and we loved the relaxed but stylish atmosphere.