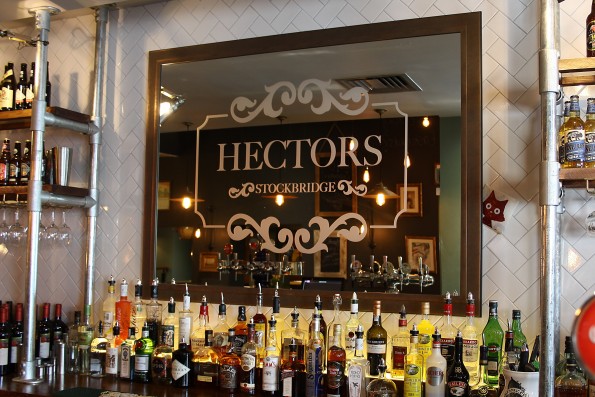 Hectors has been around for as long as many people can remember and has built itself up to be a Stockbridge institution. It’s definitely a firm favourite amongst many locals and having recently undergone a full refurbishment the pub is looking better than ever, with a brand new food and drink menu it’s sure to catch the eye of many more people.  The interior has been thoroughly spruced, with the bright and airy front bar offset by a cosy back bar with an industrial edge with plenty of space for drinking and dining.

The main reason for our visit was to sample the new menu on offer at Hector’s. The menu has changed and now incorporates small plates. New dishes include Salt & Pepper Squid with spicy mayonnaise, BBQ Pulled Pork Sliders, Whitebait with tartare sauce and lemon and Potted Smoked Chicken & Duck Rillettes, with apricot & apple chutney and sourdough toast. I should warn you that these dishes are for sharing but if that doesn’t float your boat then there is a selection of traditional pub classics available, larger plates that draw on the finest seasonal ingredients. These dishes range from pan-Fried Salmon Fillet with asparagus, heritage potatoes and wild garlic pesto, Chicken, Leek & Ham Hock Pie with mash, braised carrots and seasonal vegetables or Slow-cooked British short rib with fries, summer slaw & ginger ale ketchup.

My choices for the evening were salt & pepper squid with spicy mayonnaise, BBQ chicken wings and handmade scotch egg with a wee side of fries. Jonathan opted for the more filling option of slow-cooked British short rib with fries, summer slaw & ginger ale ketchup.

It seemed like we had no sooner ordered than the procession of food began. Each of the small dishes arrived promptly and actually were much bigger than I had anticipated. They are designed for sharing but with Jonathan having ordered the ribs, it seemed my eyes were much bigger than my tummy! The chicken wings were tasty and had a fantastic grilled BBQ taste to them. The meat was juicy and there was certainly plenty of sauce on the wings. The calamari was a good effort for pub food. The batter could have possibly been a little bit crispier but this was balanced out with the calamari being well cooked. Calamari is one of those things which is very easy to over cook but this was just right. The scotch egg was again tasty. The only point to note on this was the use of an English sausage especially when Crombies is not very far away and there is plenty of great Scottish sausages which could have been used. This might make the menu appeal a little more to the locals. 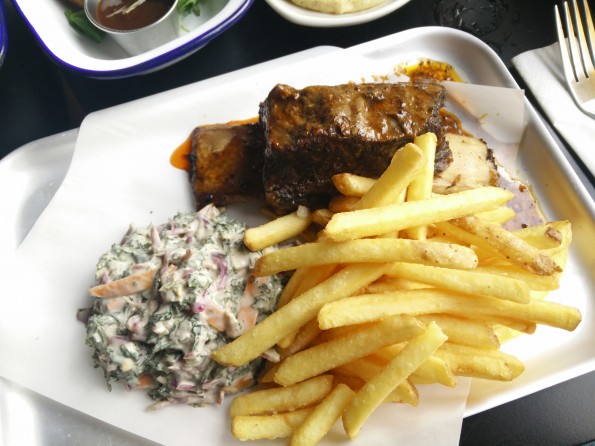 Jonathan’s choice was a generous serving. We had expected a rack of ribs but it was actually one massive rib. This was much easier to eat and the meat just fell of the bone. The slaw was tasty and alongside the tangy ginger sauce of the ribs was a great combination.

You would think that after that we wouldn’t have had room for dessert, well think again. We browsed the dessert menu and eventually after a recommendation from our waiter opted to share the chocolate praline profiteroles with Jude’s salted caramel ice cream and Devonshire caramel sauce. These hit the spot. They were sweet, sugary and very moreish and exactly what is needed after a feast like we had.

The only comment we would make on the menu is the lack of Scottish produce. There are a number of references to English produce which seems a little out of place given the vast number of great Scottish producers. The menu could incorporate a more Scottish twist and I think they’d be onto something even better.

The food was exactly as we had expected and we left feeling it had lived up to our expectations and thinking we would be back. The staff are great. There was an older lady seated behind us and once finished the bar staff made sure she had a taxi ordered and made sure she was well looked after. That’s what we call great service and now a days is all to easily forgotten. If you’re in the area, we’d definitely say pop in. If you can nab yourself a window seat you can spend all of your visit happily people watching.

*We were invited along to review Hectors, all views expressed are our own. Interior photographs are courtesy of Roche.