It seems that pubs like Jeremiah’s Taproom are popping up all over Edinburgh.  This is no bad thing for us as we love trying out new places.

After spending the morning shopping we popped in and after hearing good things about their hotdogs from friends, it would be rude not to try them.  I opted for the classic dog and the other half chose the chilli dog.  Quickly scanning over the menu it seemed there was a lot of tasty bits and pieces such as burgers.  We also noticed that they offer a Sunday roast with all the trimmings for £9.95.  Which is a good price as you can often pay more elsewhere.

Whilst waiting for our hotdogs to arrive.  We took a quick look around and found it had vastly improved from the days of The Elm.  It was now somewhere you could imagine spending a rainy Sunday afternoon with friends and before you know it, it’s 8pm and the regular Sunday night quiz is starting.  They offer a wide range of drinks and pretty much all bases are covered from cocktails to draft ales.

Our hotdogs arrived in cute little Jeremiah’s Taproom trays which suited the theme of the place without being tacky.  I have to say, first bite of my hotdog and I was sold. 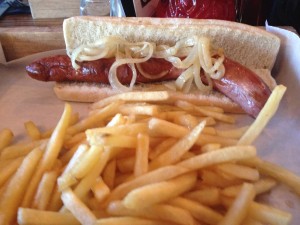 The Crombie sausages were delicious.  They were full of flavour and they certainly lived up to their foot long length.  The classic hotdog was served with onions and the chilli dog had a generous helping of chilli on top of the hotdog, which I have been told was delicous.   There wasn’t much talking done until we had finished eating and then all we could say was how tasty the hotdog was.

Jeremiah’s is definitely somewhere that we will venture back to and as it’s on our way home, it would be rude not.