This week we found ourselves invited for dinner over in the New Town.  Our venue was The Magnum. The Magnum is situated on Albany Street a little walk from the city centre. We have only ever been here for a drink before so we looked forward to what awaited us.

Chef Paul Dow works to combine Scotland’s best local ingredients with traditional flavours and serves classic Scottish dishes alongside fresh seasonal game and seafood. This ticks all the boxes of what we call good food.

The Magnum offers its diners a chance to either eat in the bar or their dining area where you can mix or match between their bar and a la carte menus.

We choose to eat from the a la carte menu in their dining room. The room benefits from the evening sunshine and even at 7.30pm the sun was still streaming in the windows. Later on when the sun sets, the fairy lights which adorn all windows shine and creates a cosy, romantic feel. Around the top of the walls, there is whiskey inspired poetry written by a local writer.

The menu on the night was a little different from that currently online but it’s largely the same with a few seasonal differences.

I am a huge fan of Scottish Smoked Salmon and know that it’s a pretty simple starter but when it’s super fresh, not overpowering and served with dill pancakes like I had here it makes a fantastic starter. The dill pancakes were very tasty and the smoked salmon was fresh. The parsnip crisps added that extra bite to the dish. Everything worked well together, only downside was I could have eaten another pancake and salmon. 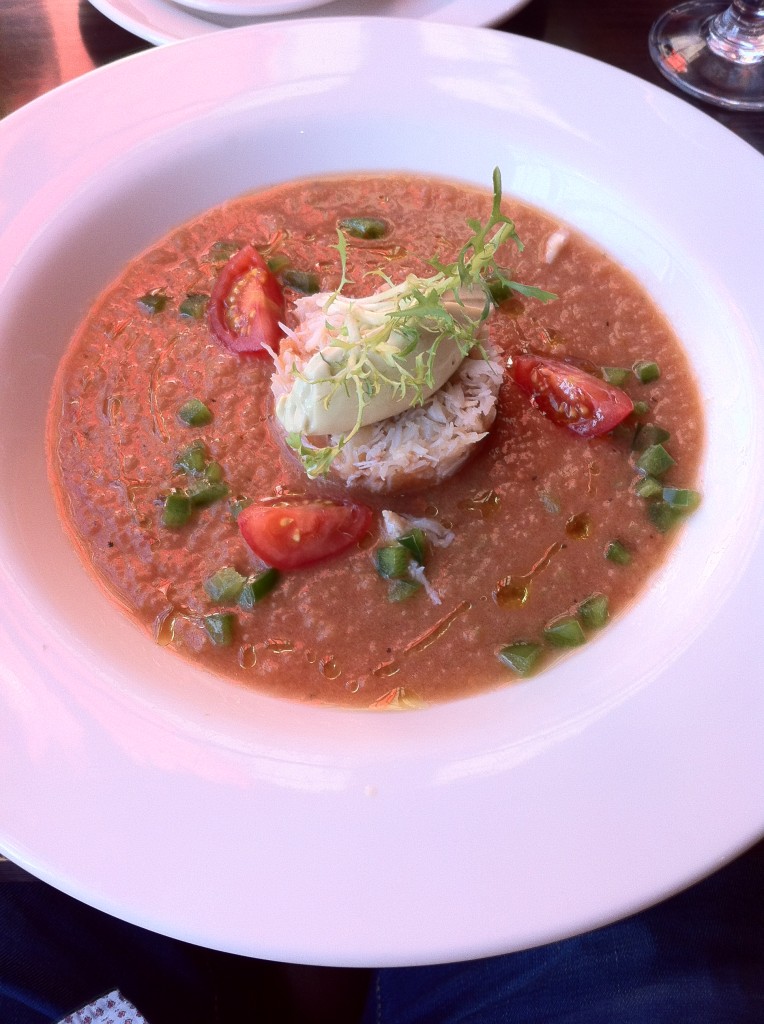 The Devonshire crab cazpacho was very tasty, crab plentiful and fresh. Mr Edinburger described the dish as very refreshing and perfect for a sunny summers evening.

My venison steak was cooked to perfection. I asked for it medium to well done and that’s what I got. There wasn’t a single bit of fat on it and it was fantastically tender. The veg was seasoned and cooked well. The redcurrant jus added an extra tang to the veg. The dauphinoise potatoes were also great although I’m more partial to good mash. Apart from that I don’t have any complaints about my dish at all. Definitely something i’d have again next time we’re back.

There was a little bit of food envy at tonights dinner. When I saw the steak Mr Edinburger was presented with I was a tiny bit jealous. It looked fantastic and smelled delicious. The rib eye steak was cooked to request, he prefers his steak rare. The steak was a decent size for the price. The grilled vine tomatoes were tasty and bursting with flavour and the hand cut chips were nice and crispy on the outside and fluffy on the inside. This dish too sounded like a winner.

After all that, we debated if we had room for dessert but when we saw sticky toffee pudding with salted caramel sauce and vanilla bean ice cream and cranachan cheesecake with red berry coulis and raspberry compote, it was too hard to resist. 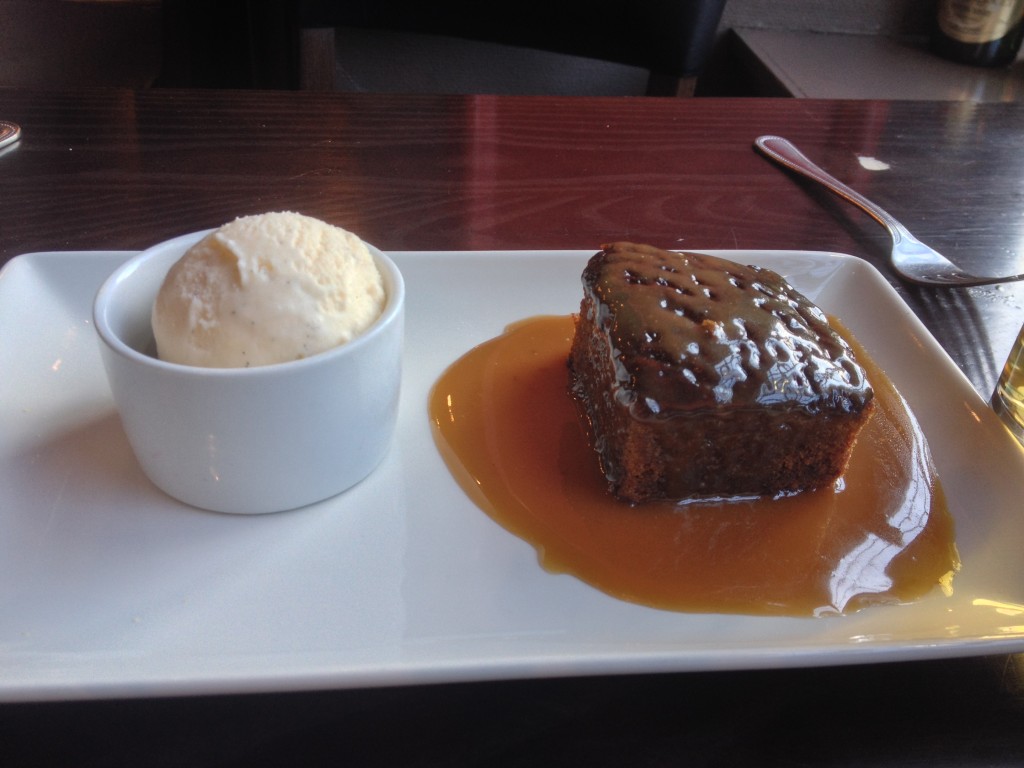 Mr Edinburger is a huge salted caramel fan, which is why he ordered this. The salted caramel was a tad too salty for me but he enjoyed it. The sticky toffee pudding was moist and all three worked together. The hot sauce contrasted with the cold ice cream was great. 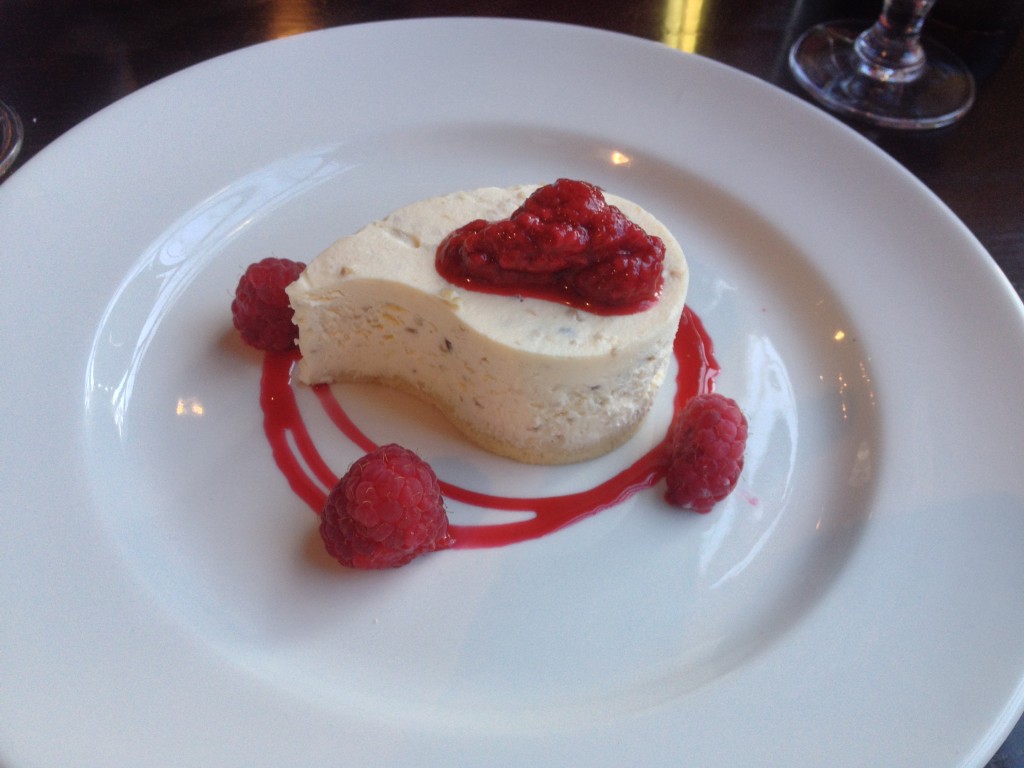 This dessert was great. It was rich and creamy oat mixture with a great shortbread base. As I’d eaten so much before, I was unable to finish it. Maybe not a dessert to have if you’ve had two pretty big courses before but there’s always someone around to finish it.

Overall, we had a lovely evening at The Magnum. The staff are great and very attentive. They have a good knowledge of the food which always help.

The Magnum was always somewhere we thought of for a drink but now we have eaten here, it’s on our list of go to places. We’re big fans of Scottish food and from what we tasted, the chef seems to be pretty good at it and tries to put a modern twist on it. The menu caters for everyone and even has gluten free options on the menu. If you’re in the area and find yourself near by, it’s well worth a visit.

*Disclaimer – we were invited to The Magnum for a complimentary dinner and were in no way asked to write a positive review.