A few weeks ago we found ourselves on the no. 35 heading up to the Royal Mile and excitedly talking about what we were going to have from the new cocktail menu at Monteiths.  We’d been invited along to sample both the new cocktail menu and some food.  Now i’d had a quick look at the menu and there was so many lovely things i’d wanted to try.  I’d previously been to Monteiths for a drink but Mr Edinburger had never been and was very much looking forward to the evening.

For those of you who don’t know, Monteiths is situated down a wee alley just off the Royal Mile. Basically just follow the fairy lights.  They have a lovely seating area outside and then inside you’re greeted with a very cosy, traditional Scottish feeling room.  Due to the lightening we had a bit of a camera failure and Monteiths have kindly provided us images of the interior and cocktails.

Now everyone who either reads the blog, follows us on twitter or knows us will know that I like a good cocktail.  Monteiths have recently launched their new menu and I was spoilt for choice. First of all I went for the Ruby Rickey which is Finlandia Grapefruit vodka, Aperol aperitif, charred lemon juice, pink grapefruit marmalade & house tonic water.  This was very good, has a sharp taste but its very refreshing.  Later on in the evening I then had the skittle swizzle which is Stolichnaya Citros vodka, Rare Vinyards Pinot Noir, strawberry puree, lime juice & house vanilla syrup.  This was definitely my favourite of the two.  Each was well presented and well made.  Mr Edinburgh wasn’t feeling his usual adventurous self and stuck with Moretti and Malbec for the evening. Now for the food. If you’re feeling in the mood for a snack there are a number of tapa style dishes to choose from.  These all sounded fantastic but we were both in the mood for something a little more filling. 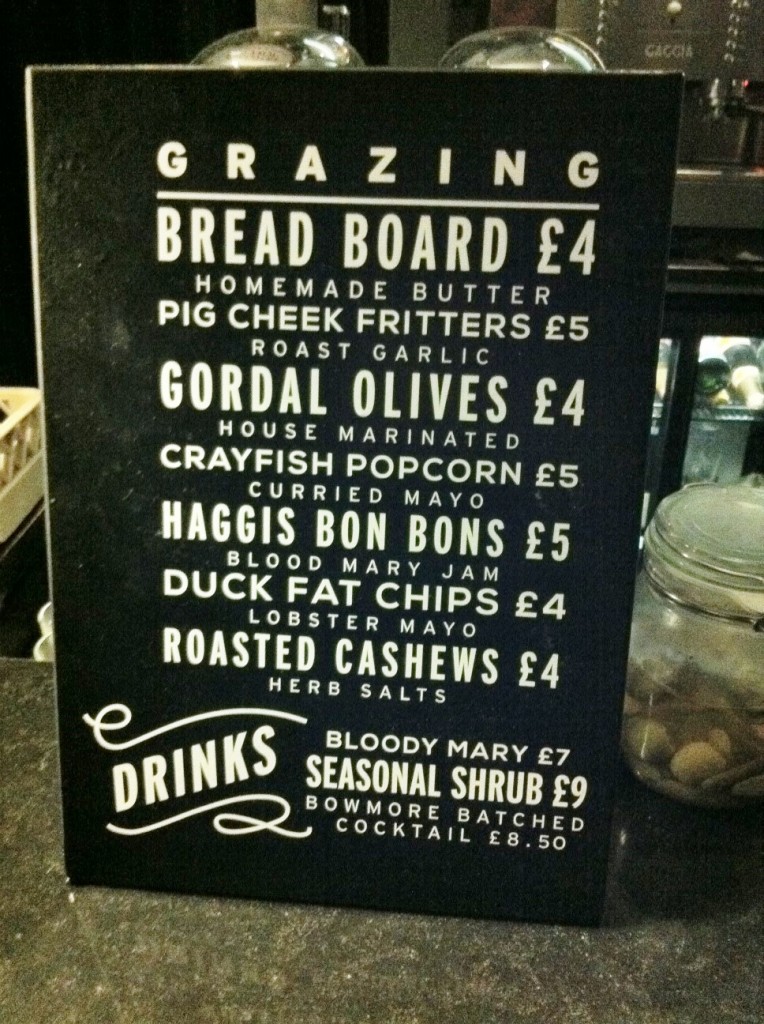 Once we’d made our choices, we tucked into some olives.  These are possibly the biggest olives I have ever eaten.  They are marinated in house.  I’ve no idea what’s in it but it gives them a fantastic meaty taste.  We made quick work of these and by that point our starters had arrived.

My starter was very good.  The liver parfait was smooth, well seasoned and not overpowering. The brioche toast was crisp and worked well with the parfait and orange jelly.  All the flavours came together well and I would definitely order it again.  The Arbroath risotto which the other half had was well cooked, well flavoured and the soft poached egg added extra flavour. Unfortunately we don’t have a picture as we had a camera failure.  The lighting and our picture didn’t really do it justice.

Next to arrive was the main course.  For this I choose roasted chicken on a caramelised onion tart & smoked mushroom cream.  Mr had the special of the night which was  breast of duck served with black pudding, leek and cherries.

The roast chicken was well cooked, moist and seasoned well.  It was served on top of a caramelised onion tart.  The tart was lovely, the only complaint being the pastry was a little too moist at the bottom.  The sauce was a fantastic addition to the dish and brought everything together.  The main courses do not come with sides so we ordered duck fat chips and smoked mushrooms.  The duck fat chips are huge.  At first we thought 9 chips in a wee pot was stingy but in hindsight because they’re so big, it was more than plenty.  The smoked mushrooms were done in garlic and again were very tasty.

Above is Mr Edinburgers main course.  It smelled fantastic and I’ve been reliably informed that it was delicious.  He thought the duck and black pudding worked well with the sweetness of the cherries.  The duck was cooked to how he likes it and the black pudding was cooked just right.  If anything I think he would have liked more of the dish but then he wouldn’t have had room for dessert 🙂

Picking dessert was a simple choice for me.  I am a lemon meringue girl at heart and when I saw it on the menu I had to have it.

We had a fantastic night at Monteiths and judging by how busy it was whilst we were there, it seems we’re not the only ones enjoying the great food. The service was also great.  The staff are super friendly and nothing is too much bother! We’re already planning our next visit.

*Disclaimer, we were invited to Monteiths for a complimentary dinner. We were not asked to write a positive review and all views are our own.