A few weeks back we travelled to Prague following an invite by Pilsner Urquell to visit their brewery in Plzen as part of The Original Collective. Our brief was simple: experience the Pilsner Urquell Brewery tour, meet some of the team at Pilsner, and generally drink beer and enjoy some Czech hospitality. Unsurprisingly we jumped at the chance. Czech Republic has been on Mrs Edinburger’s to do list for some time so it was the perfect opportunity.

The Origins of Pilsner Urquell

It’s always nice when a beer has a bit of history or an interesting story behind it and Pilsner Urquell has that in abundance. The story behind the origins of the beer and the brewery goes all the way back to 1838. At the time around 250 citizens of Plzen had brewing rights to brew their own beer. However poor quality beer and some tavern  owners charging above the odds led to the people of Plzen taking action. 36 barrels of beer were taken to the town centre and smashed into the street. The decision was then made to build one new brewery which would be run by the city. Josef Groll, a visionary Brewmaster, was brought in to make the beer and using pale malted barley, local hops, the soft water of Plzen and a lager yeast the new beer was born. The first batch was brewed in October 1842 and the first beer was drunk in the town a few weeks later. Incredibly the original recipe has since remained unchanged.

As soon as we landed in Prague we headed off on board our mini bus to the city of Plzen, the home of Pilsner Urquell. The first stop on arrival was Na Parkánu, a pub just outside the brewery grounds for a spot of early lunch and a beer. Na Parkánu only serve Pilsner Urquell and due to its close proximity to the brewery it’s one of the only places you can always get unpasteurised and unfiltered beer straight from the brewery cellars. It very quickly became apparent that beer and food are cornerstones of the Czech way of life. I immediately felt right at home! After a couple of beers and some very tasty food we were all set to explore Plzen further and get started on the tour. We had a stroll along to the main square to walk off our lunch and take in some sights before making our way to the brewery. 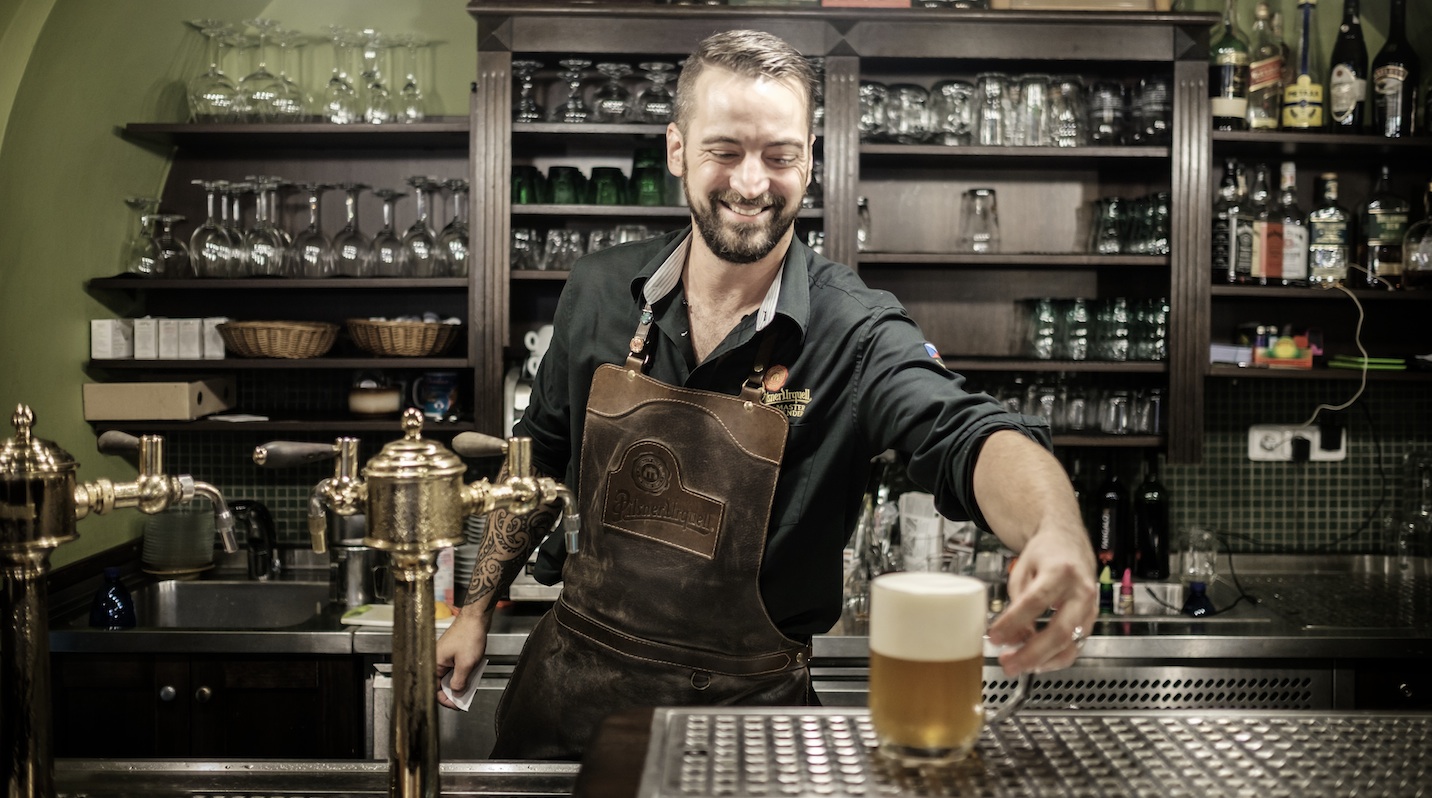 Our guide for the tour was ‘The BeerMaster’ Robert Lobovsky. Robert is clearly very passionate about his profession and was an absolute wealth of knowledge. Before getting started we sat down with Robert, some of his colleagues and a couple of guys from Albert’s Schloss in Manchester who were over in Plzen to undertake the Tapsters Programme. Despite the fact that we had literally just finished lunch, when we arrived the guys were tucking into some steak tartare on top of fried bread, rubbed with garlic and of course I had to sample some. It was absolutely delicious. That was washed down with some more beer.

During the tour we were taken through every area of the brewery, from the distinctive gated entrance, the sprawling grounds which includes an old railway line which ran through the brewery grounds, down to the cave cellars storing barrels upon barrels of Pilsner Urquell. We were also informed of all stages of the brewing process. A process which has been followed since 1842.

The softness of the water in Plzen plays a significant part in the making of Pilsner. They even have their own water tower, which was built in 1907 and although not in use today the water still travels via a pipeline through the old water tower before making it’s way into the new facility. Which seems like a nice way to keep the historic tower included in some way in the production process.

The water is the first step in the production of Pilsner Urquell. A special malted barley is then produced, which is a harder malt, unique to Pilsner Urquell. The Czech Saaz hops are another vital part of the ingredients used to brew Pilsner Urquell. The Saaz hops grow in Zatec, around 80km from the brewery. They are known for their clean bitterness and spicy, citrus aroma. It was a real privilege to see the whole process and all that goes into making this fantastic beer. 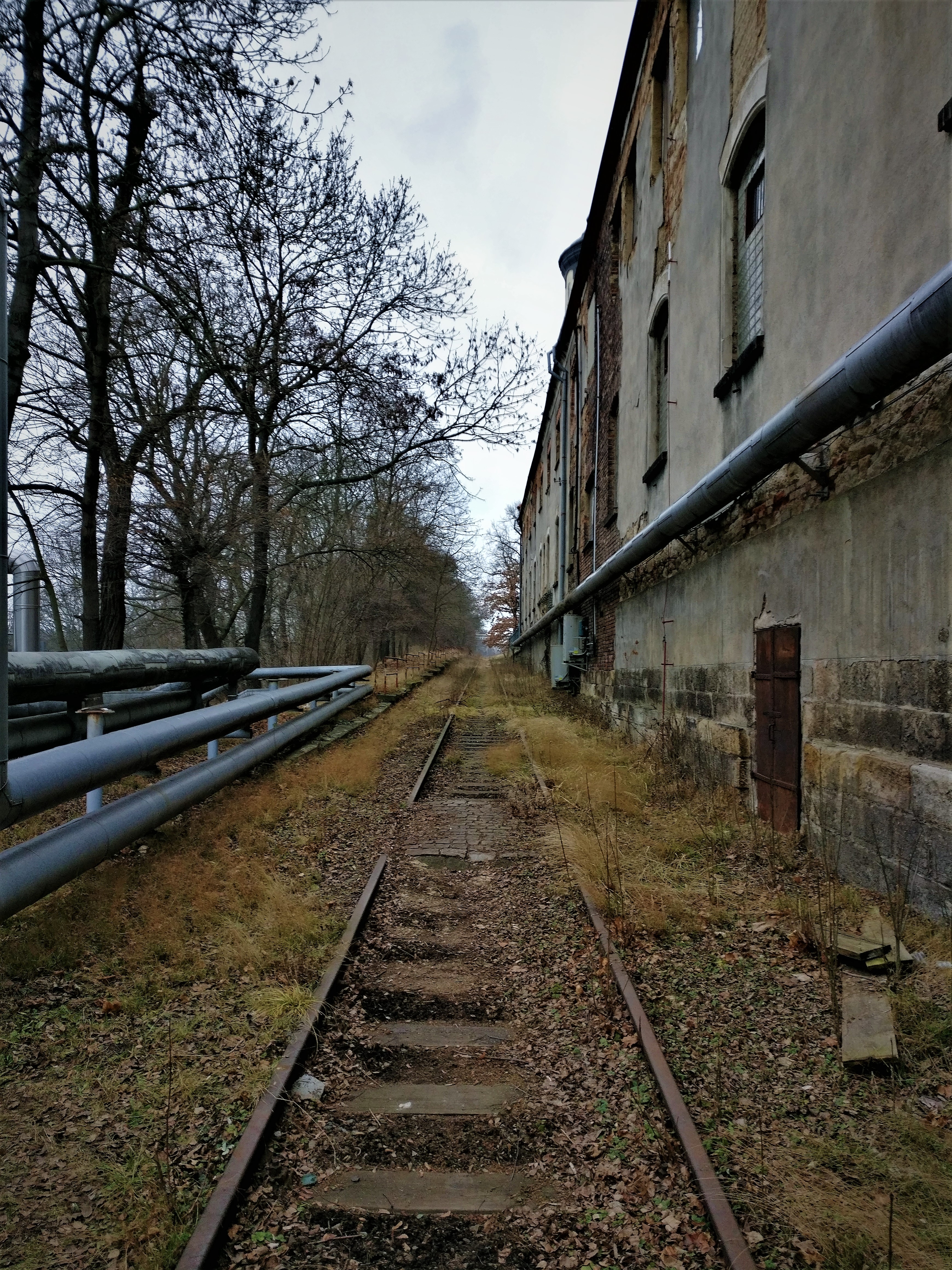 When you drink Pilsner Urquell you get a hint of caramel. The flavour comes from a process called ‘decoction’. While the Pilsner malt is mixing with hot water in the mash tun, a portion of that mash is separated and pushed into another vessel, where it’s brought to the boil. This is then returned into the mash tun with the rest of the liquid, where it has the impact of raising the overall temperature. That’s a single decoction. Pilsner Urquell repeat this process three times on each brew. The extra heat generated by repeating the process gives a richer texture, more malt depth and that caramel sweetness.

In the image above is a real piece of history – the original copper tank that Josef Groll used to brew the first ever batch of Pilsner Urquell. It’s still on site at the brewery and while no longer in use you can see it up close as part of the tour.

Whilst walking through the brewery grounds with the contrast of old and new between older parts of the brewery which have now been replaced with newer facilities you do get a very strong sense of the history of the place. You can almost smell it. Well, actually you can smell it; some of the barrels still in use today are over 100 years old!

As will be apparent by now the history of the brewery is still very important and something which Pilsner Urquell are rightly very proud of. Something we learned while being given a tour of the archive on site was just how big a part the brewery has played in the history of the city of Plzen. Without the Brewery there would be no city and without the city there would be no brewery. Pilsner Urquell put Plzen on the map. Although it was the people of Plzen who put brewing and the brewery at the heart of their city. The volume of books and documentation within the archive was really impressive, some of them dating back over 100 years. They have two people employed at the archive and again it showed just how committed they are to keeping the heritage at the forefront of the Pilsner Urquell brand.

During the tour we were also taken in to the Coopers workshop to see the trade at first hand. This isn’t part of the standard tour so we felt quite privileged to see them at work and be shown round the workshop.

In 1954 the brewery established its own apprenticeship. Trainees study for three years to produce the full range of wooden barrels. Keeping this tradition alive, the training programme is still used to school the next generation of coopers today, where typically it’s experienced carpenters who are taught the new skills.

Over the last 40 years Josef Hruza has led his team of coopers in the process of handcrafting the oak casks where the beer is stored to mature.  It’s the only remaining team of coopers in Central Europe. Yet more evidence of a real commitment to keep tradition alive. The coopers tasks include maintaining the large wooden barrels for the brewery cellars, producing 25 litre barrels that store and provide the unfiltered, unpasteurised beer.

The final part of the tour was a trip down to the cellars of the brewery. Traditionally the cellars were ideal to brew and store the beer due to the constant cool temperature. With advances in technology meaning less beer being made in the cellars parts of the underground area were gradually decommissioned. However as part of the transition from wood to steel, the cellars still play an important part in the parallel brewing process – beer brewed in both tanks and then compared by the Brewmasters until they can no longer taste the difference. Sounds like my ideal job!

When we arrived at the entrance to the cellars we were greeted by Vaclav, one of the Brewmasters responsible for the taste testing. Vaclav showed us around the cellars then we all had a chat and enjoyed a glass, or two, of unpasteurised, unfiltered beer straight from the barrel. We could have quite happily stayed there all afternoon to be honest. There’s something about the unfiltered beer which makes you want to keep going back for more. 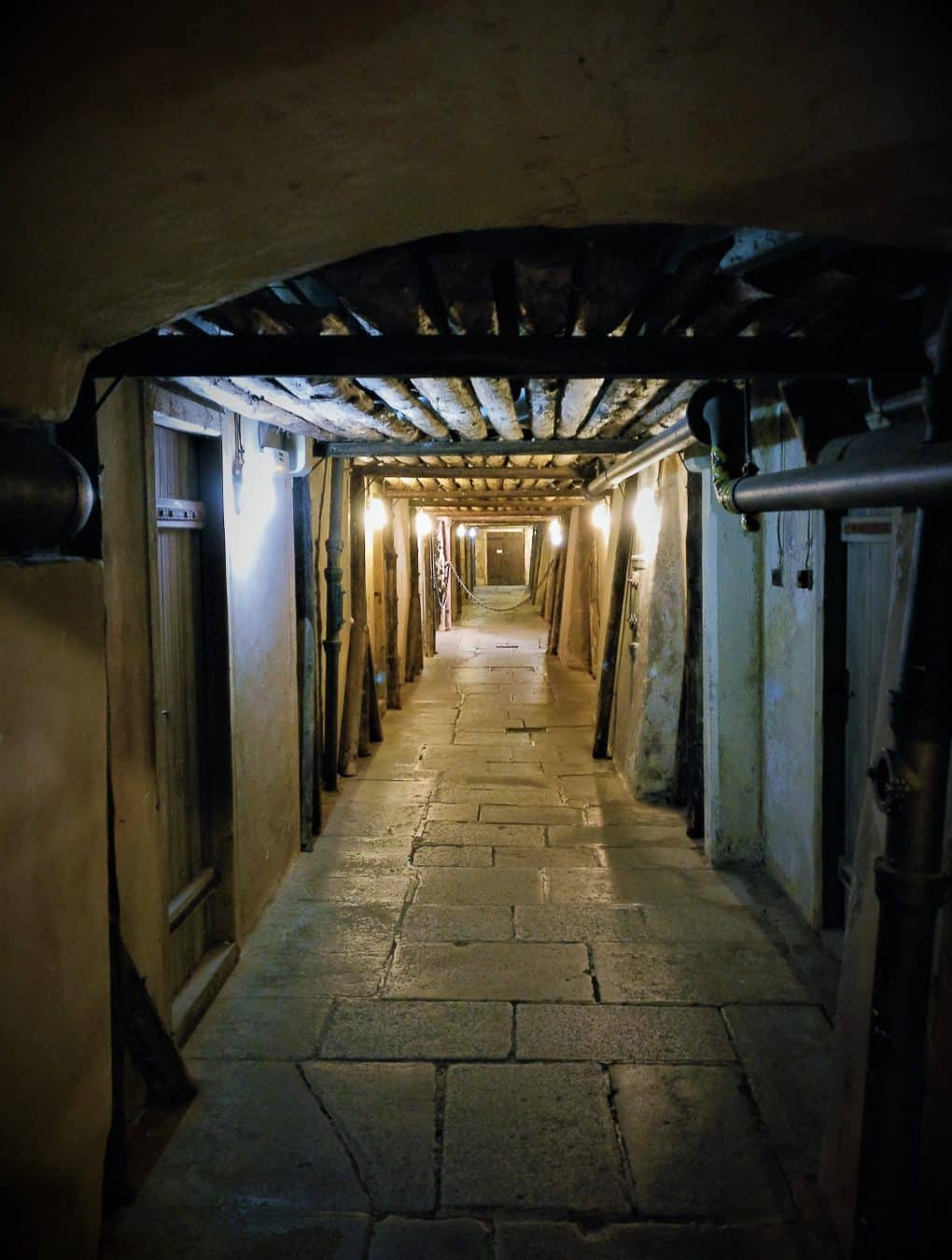 Something I had failed to pick up on during my only previous visit to Prague a few years back was the options for the pour types when ordering Pilsner Urquell. Being the typical tourist my default order was ‘large beer please’. However being in expert company this time in became clear that there is a multitude of options when it comes to how you want your beer poured. 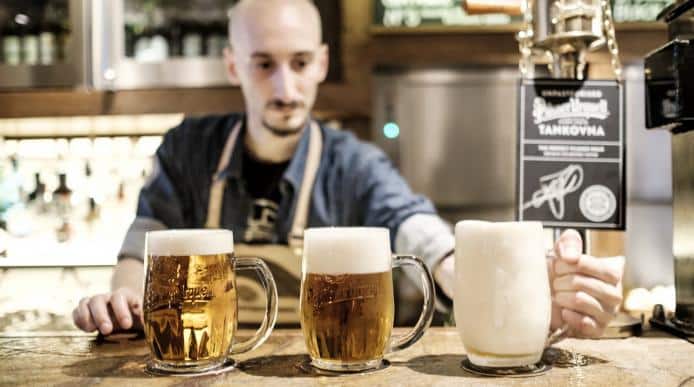 The classic pour. It’s smooth with soft carbonation and ideally served at the start of a meal. When a Tapster pours a Hladinka, they first create a layer of foam and then fill the beer beneath it, which preserves freshness and flavour.

The Na dvakrát has the least amount of foam of all the classic Pilsner pours with a thin layer of white foam on top. It’s refreshing and helps keep the beer fresh over a longer period of time.

The Tapster opens the tap slightly, letting the glass fill up to the top with foam. Some of this foam then settles, becoming beer. Resulting in a smooth and creamy pour to be drunk quickly.

We really had a fantastic time in Plzen at the Pilsner Urquell brewery. As well having a lot of fun and drinking plenty of beer we also gained a wealth of knowledge about the city, the brewery and the beer. We’ve already been thinking about when we can next get back to the Czech Republic to see more of the country and well lets face it drink more of that excellent beer!

Thank you to the team at Pilsner Urquell for inviting us over and being such wonderful hosts.

*Disclaimer: We were invited over to experience the brewery tour by Pilsner Urquell. However all opinions are our own.