Discovering new places to eat and drive to has quickly become one of our favourite Sunday past-times.  This makes me feel incredibly old but when we were invited along to The Elphinstone Hotel, Biggar to try out the food and review it, we couldn’t say no.  It was great to have something to look forward to after the post-holidays blues had well and truly set in.

On this occasion Mr Edinburger was the driver, we decided that the roads would probably be more civilised than those on our recent trip to Loch Earn.

We set off and quickly discovered that in no time we where whizzing past the Pentlands and well on our way to Biggar.  Neither of us had been before so we were a bit unsure what to expect. 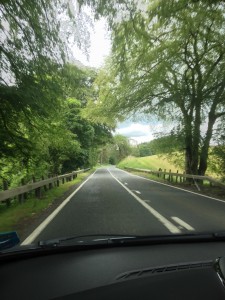 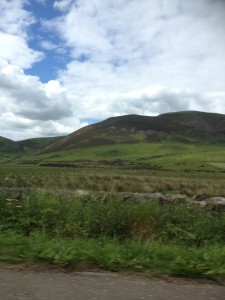 We arrived in Biggar and quickly found a spot to park.  It took about an hour to drive from Edinburgh.  Which is very reasonable and when the road down was as nice as it was, we hardly noticed we’d been driving for that long.

Our welcome at the Elphinstone Hotel was warm and friendly and we were quickly shown to our seats.  From the outside we were unsure what awaited us inside but once in, it reminded me of a wee country pub back in Northern Ireland.  When we had ordered our drinks and were deciding what to have, the menu has a huge selection of food it really does cater for everyone, we noticed the place was filling up. The menu is possibly a little too big tho. There are several dishes of each kind of meat. It’s not fine dining, but more hearty, comfort food. It seems it’s a popular spot on a Sunday. 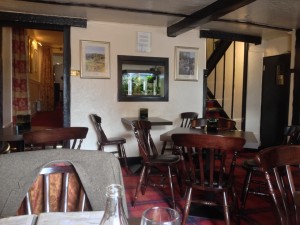 After having looked at the menu for sometime I decided on deep fried brie wedges for starters and fish pie for mains.  Mr Edinburger had the same difficult choices to make and he eventually settled on cullen skink and a pork and black pudding tower.

Within no time at all, the starters were out and we were tucking in. 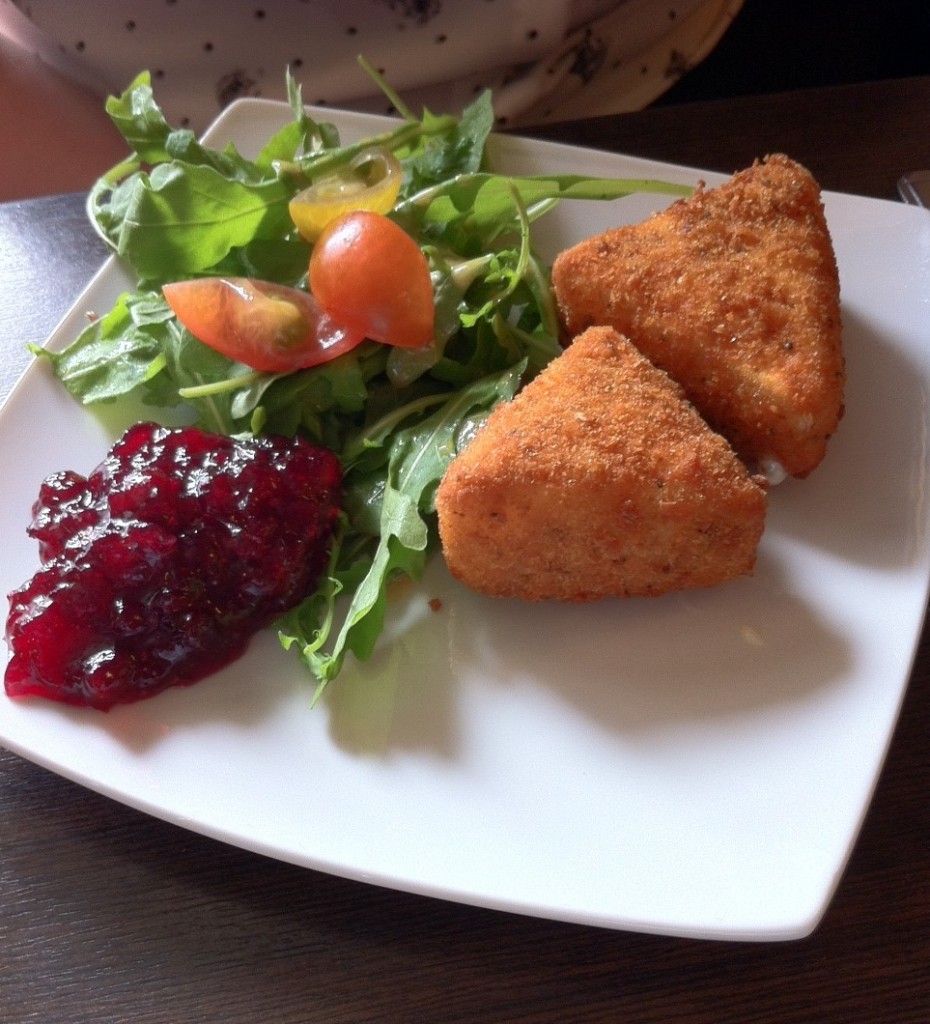 The deep fried brie was lovely.  It was cooked just enough that the brie was gooey inside but not so warm it burns your mouth when eating.  It was served up with a lovely side salad and some cranberry sauce.  The portion was an OK size but I could have easily eaten another brie wedge. That might be because I love cheese and it seems you can never have too much! 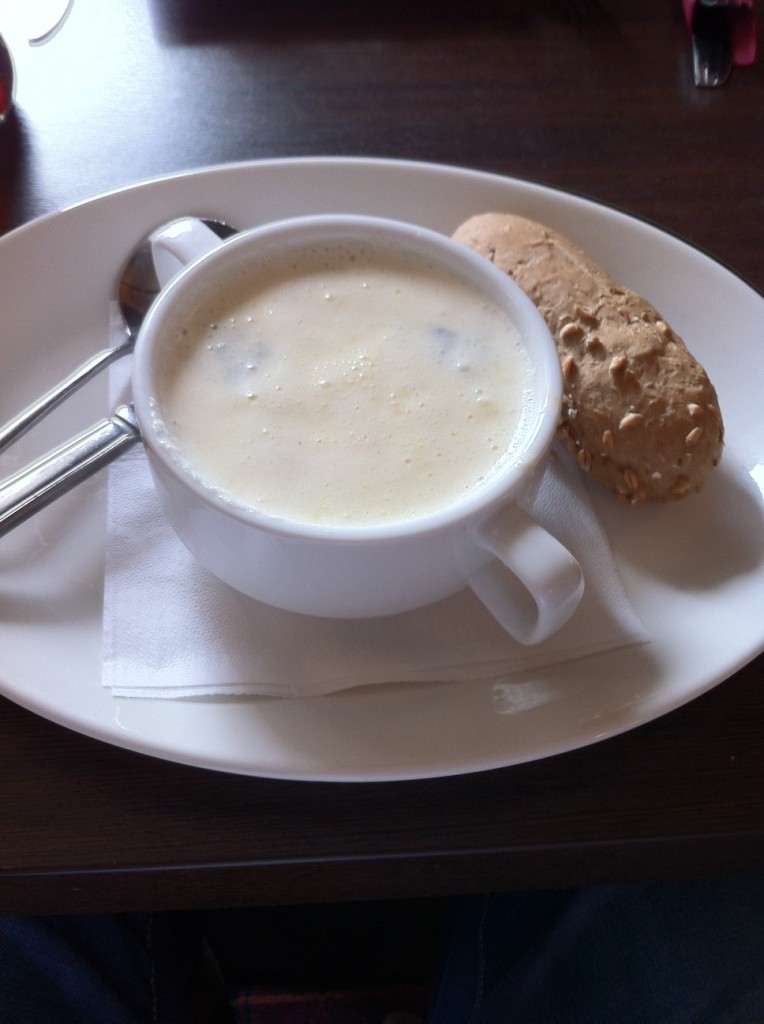 Mr Edinburger’s cullen skink was fab.  It was rich and creamy, with lots of potatoes, leeks and huge chunks of smoked haddock lurking at the bottom.  He was very glad he’d choosen this over his original choice of lentil soup.  It was seasoned perfectly.  Very hard to find any fault with it at all.

Next up was the main event.  After having tasted the cullen skink I was holding high hopes for my fish pie. 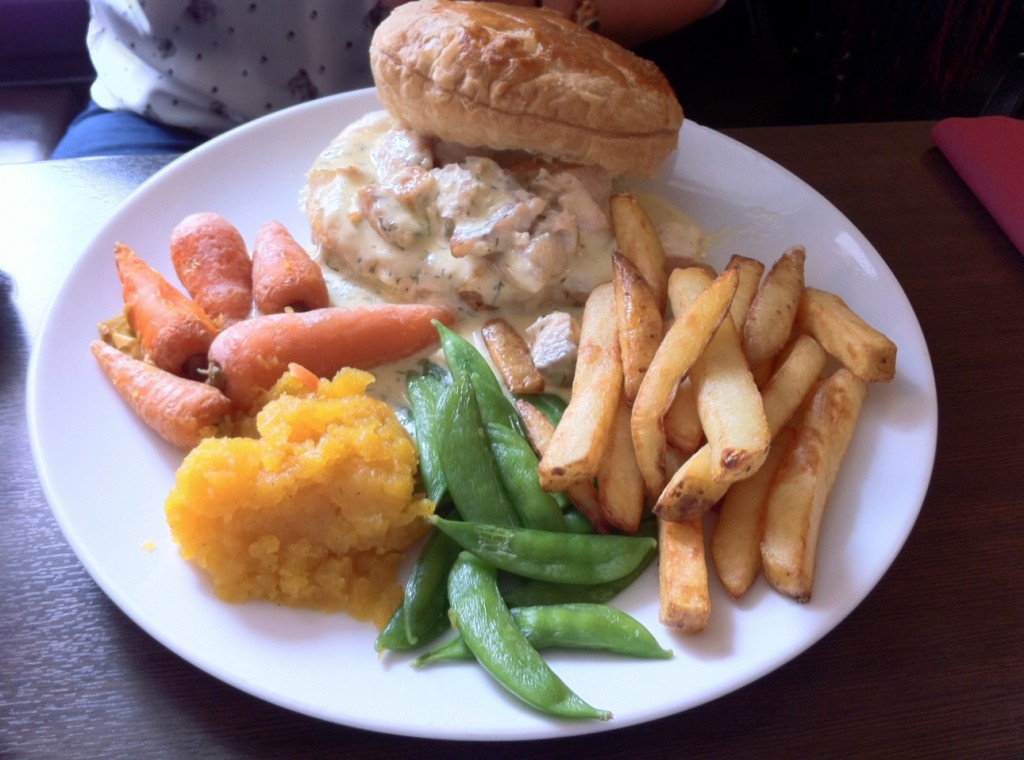 The fish pie arrived.  It normally comes with potatoes and mixed seasonal veg but I asked to change the potatoes for chips.  The fish pie was served in an unusual way, with a big bit of puff pastry on the bottom, the fish and sauce served on top and then another bit of puffed pastry to top it off.  In the fish pie there was salmon, smoked haddock and king prawns.  It was definitely full of fish, so much so I couldn’t get it all finished.  The sauce was a creamy white wine, lemon and dill sauce.  The sauce worked well with the smoked fish but it was a little too heavy for me.  Everything else about the pie was great.  The seasonal veg included baby carrots, neeps and sugar snap peas. All the veg was cooked perfectly and had the right amount of bite to it, although the baby carrots could have been scrubbed a little more to take the skin off. 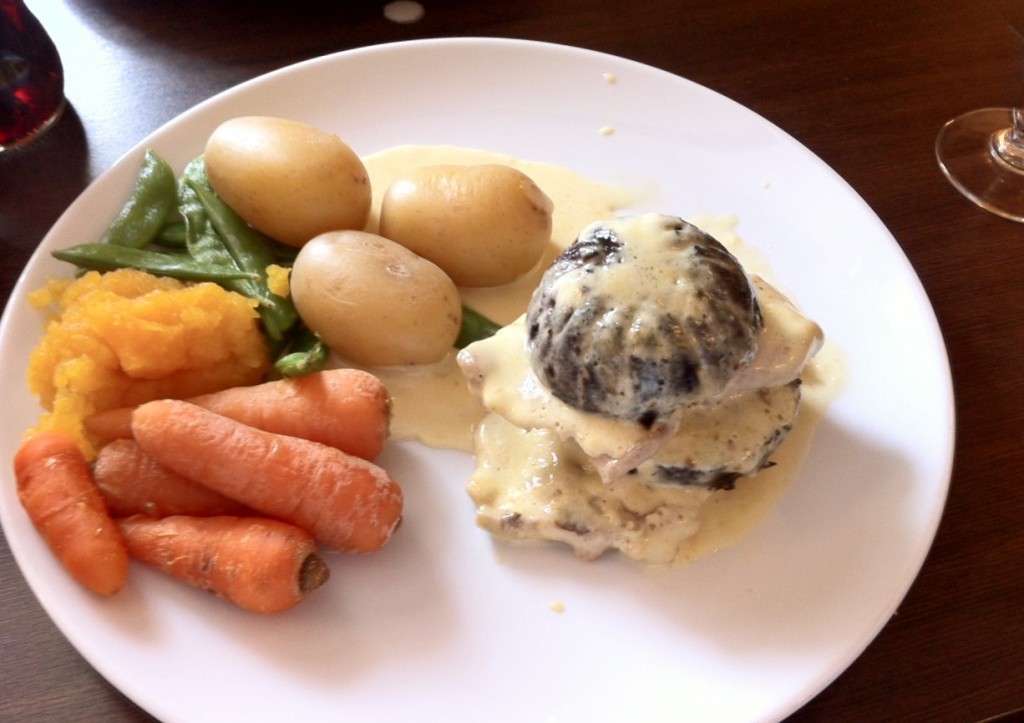 The pork and black pudding stack, certainly was a stack.  The picture doesn’t do justice to just how tall the meat tower was.  There was two meaty slices of black pudding and two slices of pork loin, all covered with a cider cream sauce.  Again this was served with seasonal veg and new baby potatoes.  The verdict from Mr Edinburger simply was “delicious and there was a huge amount of meat”.  I think all in all he was more than pleased with the dish.   The only other comment from him was the black pudding was a little too overcooked for him.

Portion size is not something that you will complain about at the Elphinstone.  We were both feeling very full and thought we really couldn’t manage dessert.  Well until we had a look at the dessert menu.  Just a few doors down is the famous Taylor’s of Biggar Ice Cream.  It clearly is something special as whilst we were sitting eating our lunch we couldn’t help but notice the number of people walking around with ice cream or sitting in their car eating a cone.

For two people who weren’t really sure about dessert we ordered 3 scoops of ice cream, ginger, coconut and chocolate and I had a chocolate honeycomb explosion. 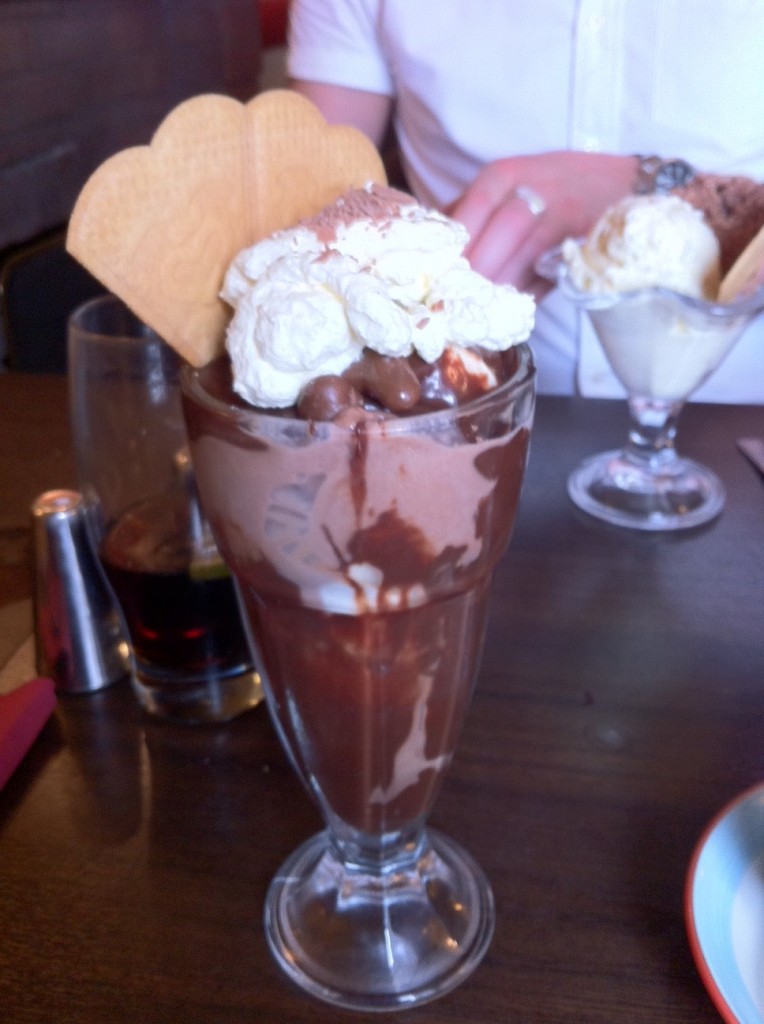 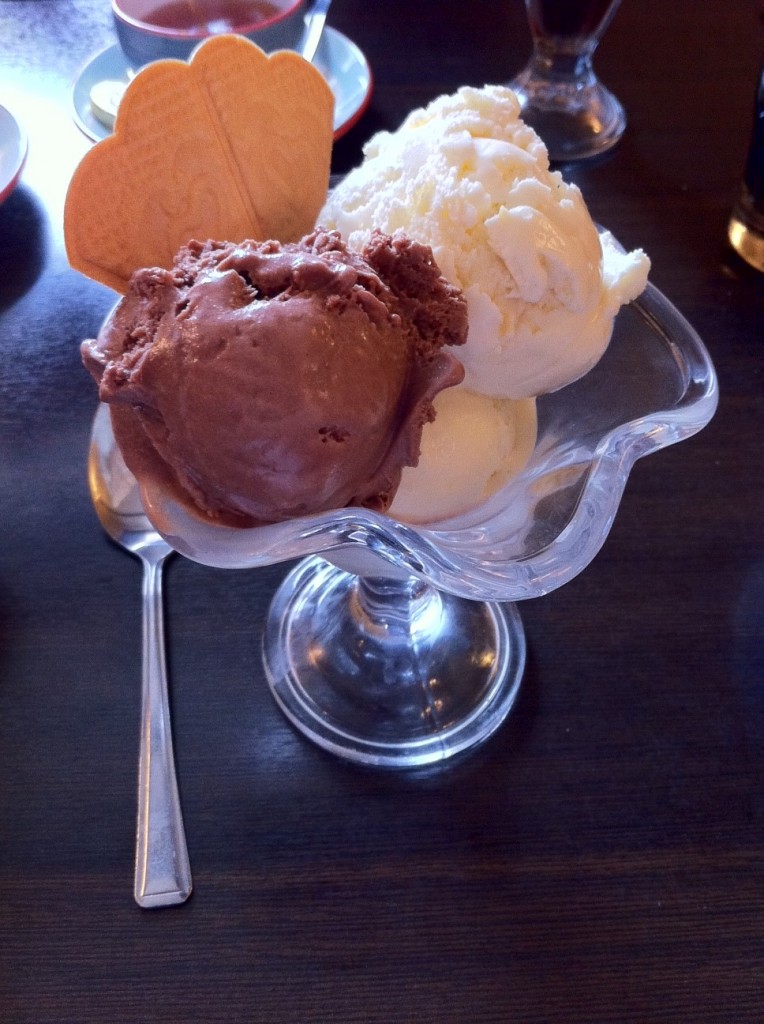 I honestly don’t know how we managed but we did.  We tried to convince ourselves that there is something about ice cream which even when you’re feeling full you always have room for it.  I’m so glad we tried the ice cream as it was delicious.  My chocolate honeycomb explosion was filled with lots of chocolate covered honeycomb pieces, chocolate sauce and chocolate ice cream.

Dessert was a brilliant end to a lovely Sunday lunch.

The Elphinstone was a great find.  We were definitely surprised at the tasty food we were served up and if you are ever down, i’d suggest calling in.  Even if it’s just for the chocolate honeycomb explosion.  The staff were lovely and friendly and really did look after us. If you’re looking for fine dining it’s probably not the place for you but if homely food is more your thing them I’d say give it a try.

Before we left Biggar we popped next door to buy more ice cream, but this time to take home.

I think we’ll definitely stop in again if we are in the area as the menu has a great range and is very reasonably priced.

*Disclaimer, we were invited to the Elphinstone for a complimentary lunch. We were not asked to write a positive review and all views are our own.