Last Sunday evening we rounded off the weekend in style with a trip to The Mumbai Mansion on Morrison Street.

Ever since Mithas shut, we have been craving quality, unique Indian food. Living up to that standard is no easy task, unless of course you are the team behind Mithas. Which is exactly what we found when we visited the newly launched Mumbai Mansion. The idea behind The Mumbai Mansion is similar to Mithas; to change the way Indian cooking is perceived and offer quality modern Indian cuisine.

When we arrived we were greeted and shown to our table by restaurant manager Merwyn. Merwyn was also manager at Mithas and has been a major part of the new launch of The Mumbai Mansion, including bringing in most of the team that made it such a success.

The interior is stylish whilst keeping a relaxed feel to it. Tables are well sized and seating between tables is spacious. Once settled at our table and our drinks ordered we had a look at the menu, it didn’t take long until we had identified at least four dishes from the starter selection alone that we wanted to try. Scallops and Mussels as well as the Monkfish provided me with my first dilemma of the evening.

The menu at The Mumbai Mansion is not your standard Indian fare. Scallops, Monkfish, Venison all feature in the starter selections. There is also a number of mains cooked on the grill, including lobster, lamb and duck. Whilst most of these don’t sound like staples of Indian cooking, they are still cooked with the same range of spices and sauces which provides a unique take on the dish, but with that unmistakable Indian spice and flavour. There is also a selection of more traditional curries such as Lamb Rogan Josh, Butter Chicken and Chicken Karahi.

I ended up going for the Scallops and Mussels to start which was served with a Nilghiri sauce. Miss Edinburger went for the Venison Boti, marinated in honey and pineapple. The scallops were substantial and cooked perfectly as were the mussels, the Nilghiri sauce was light and tasty and went very well with the scallops and mussels, almost like an Indian seafood soup. It was also served with a garlic flatbread which was perfect for soaking up the sauce. The Venison again was cooked really well, great texture and taste along with the honey and pineapple marinade.

Starters – VENISON BOTI £6.95 Marinated in honey and pineapple and SCALLOPS AND MUSSELS £7.95 Tossed and served with Nilghiri sauce

For the main course I was torn between the lamb and the monkfish however Merwyn highly recommended the whole leg of lamb so I went with that. Miss Edinburger went for the more traditional Butter Chicken and we both ordered a saffron and cumin pilau rice each and a tandoori roti to share.

The Lamb was fantastic, it was served already cut from the bone but was placed back around the bone for serving. The lamb is cooked in the tandoor and came with a tomato and onion based sauce. The meat was cooked perfectly, melt in your mouth and the sauce complimented it very well. There was also a substantial amount of meat in the dish, enough to keep hungry people like myself satisfied!

The butter chicken whilst not quite on a par with the lamb was also very tasty. A lovely creamy sauce with well cooked chicken and again a good sized portion. The saffron pilau rice was nice and light and not too overpowering and the tandoori roti light and tasty. Both sides set off the mains well. 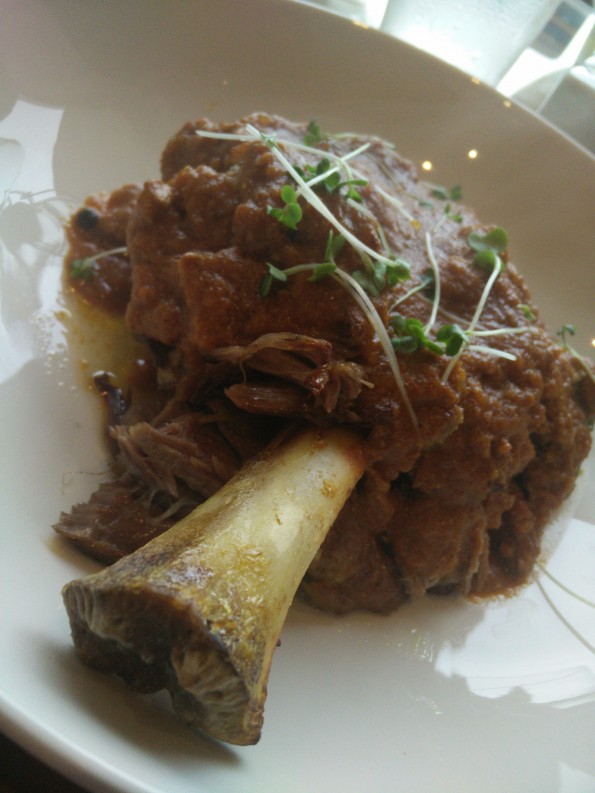 Mains – LAMB £22.50 Whole leg of Scottish baby lamb cooked in tandoor and served with tomato and onion based sauce and BUTTER CHICKEN £12.50 Chicken tikka in a tomato, honey and cream based sauce, pilau rice and roti

After such successful starters and mains of course we had to go for the hattrick and order a dessert each. I went for the Callebaut Hot Chocolate Mousse with fresh orange and ginger ice cream and Miss Edinburger went for the Sticky Toffee Pudding with toffee sauce, orange, crumble, vanilla ice-cream and fennel crisps. Having a dessert isn’t really something we would usually do in an Indian Restaurant so the dessert menu on offer was just another bonus.

We thoroughly enjoyed our trip to The Mumbai Mansion. The food was excellent, the service also. We really couldn’t fault it at all and can certainly see ourselves making a few return trips in the near future.